You are here:  Towns -> Places to Visit in Greater London -> Richmond-upon-Thames

Things to do in Richmond-upon-Thames, Greater London 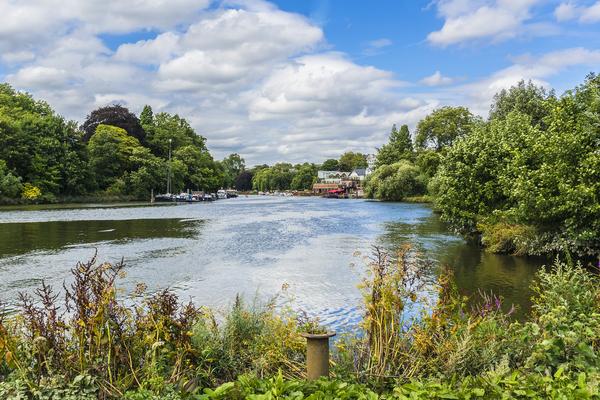 Richmond is a handsome town on the river Thames and is a most attractive place either to live in or to visit. It has picturesque houses and open spaces, smart shops, two theatres and two cinemas, many restaurants, old pubs and lively bars.

The walk by the river has been a favourite outing for Londoners since Victorian times.

Richmond is one of the few English towns to have changed its name since the Middle Ages. Originally called the Manor of Shene, it was a royal residence from the fourteenth century until the fall of King Charles I in 1649.

It acquired its new name in 1501 when King Henry VII rebuilt the royal palace on a grand scale and named it after his earldom in Yorkshire - the original Richmond. That is why there is now an East Sheen and no West one.

Only fragments of the great Palace survive at Old Palace Yard - notably the wardrobe and the entrance gateway - but many fine houses remain around the Green to remind us of Richmond's royal past. 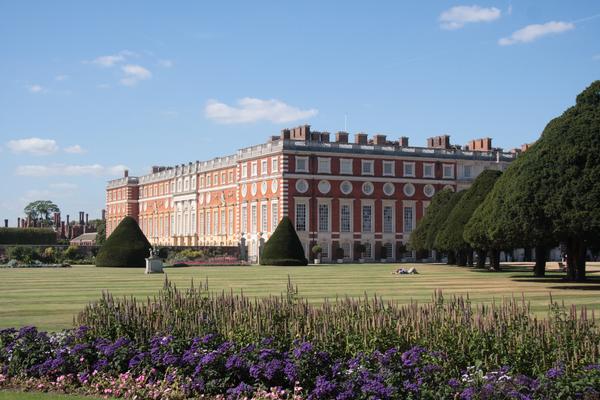 The Green itself is a beautiful space, lined with trees and big enough to hold a cricket pitch in summer with room to spare. Narrow lanes packed with little specialist shops run from the green, while two pubs look on to it.

On Little Green is Richmond Theatre, one of the most beautiful of all the Frank Matcham theatres. It was built in 1899 then refurbished in 1991. It presents a year-round programme of high quality entertainment, often showing drama productions on their way to the West End, many featuring famous stars. 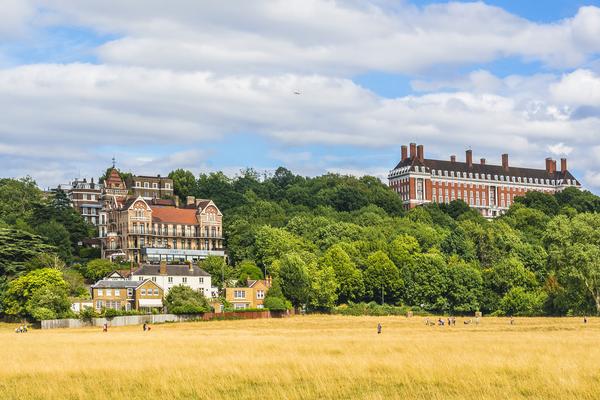 Tucked away near Richmond station is the little Orange Tree - London's only permanent theatre in the round. It presents new plays, re-discoveries, foreign work and even musicals in the round - a miniature National Theatre.

There is an art cinema in Water Lane as well as the big, mainstream cinema. This is still in its 1930 building with further screens in an annexe.

Some of the old antique shops and bookshops have been replaced by designer clothes shops and trendy hairdressers, but a few antique shops survive on Hill Rise and some independent bookshops can still be found. 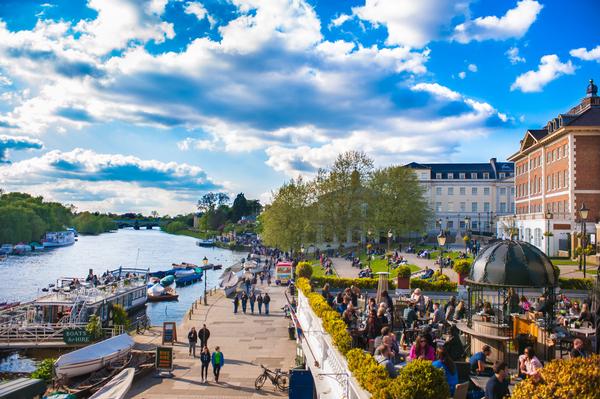 There are more shops and restaurants just across the bridge in East Twickenham - Richmond Bridge is a handsome eighteenth-century stone structure, widened in 1937.

Pubs, wine bars and restaurants overlook the river, and you can walk along the riverbanks for many miles, soon getting out into the country.

Rowing boats can still be hired on the river and are popular in the summer. It is advisable to check the tide tables before setting off, as the river is semi-tidal here and the flow can be strong. 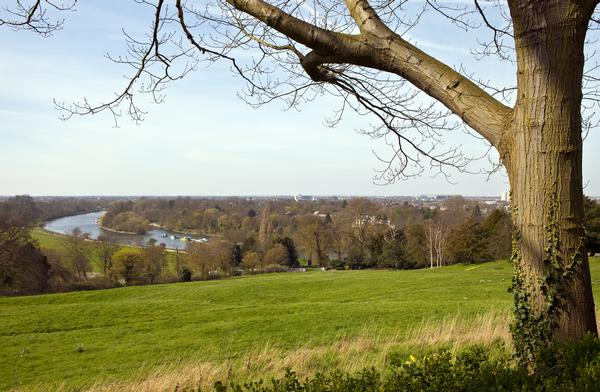 The view down on to the river from Richmond Terrace at the top of the hill is famous, and the terrace is conveniently backed by another old pub.

The best hotels are at the top of the hill, but the most impressive building there is the Star and Garter - built as a home for disabled servicemen in 1924 - opposite the gate into Richmond Park. 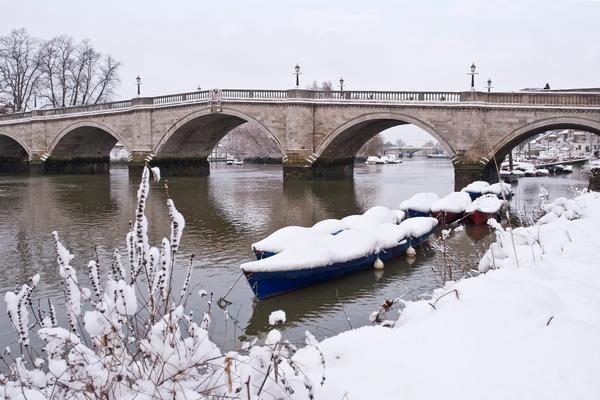 The park was enclosed by King Charles I as his own hunting park, replacing the Old Deer Park down by the river, and its enclosing wall still stands. Richmond Park is the largest Royal Park in London covering an area of 2,500 acres. From its heights there is an uninterrupted view of St Paul's Cathedral 12 miles away. 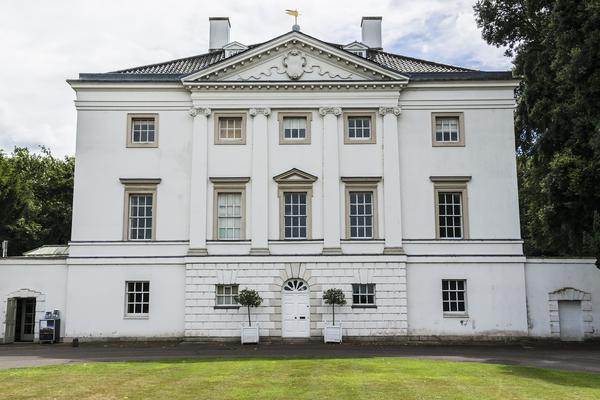 It is home to around 650 free roaming red and fallow deer. The pastoral landscape of hills, woodlands, ponds, gardens and grasslands set amongst ancient trees offers a peaceful breathing space to visitors.

Entering by Richmond Gate and walking to the top of the slope looking down to Pen Ponds, the woodlands blend with the more distant slopes of Wimbledon Common so that the park seems to go on for ever.

The Park is designated as a National Nature Reserve and a Site of Special Scientific Interest. It is always open to visitors on foot and cars are permitted during daylight hours.

Parking is free but is restricted to designated car parks which can get very busy. There are two public golf courses in the park near the Roehampton gate, and refreshments are available there and at Pembroke Lodge with its attractive gardens. 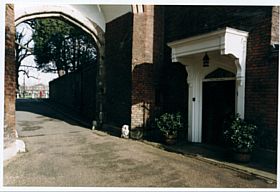 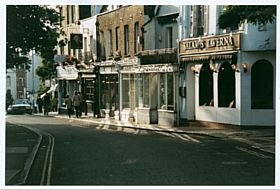 Besides Richmond's own attractions, the town makes a convenient base for visiting London, only half an hour by train from the National Theatre and the concert halls on the South Bank, and little further to the Tate and National Galleries. 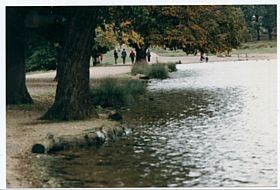 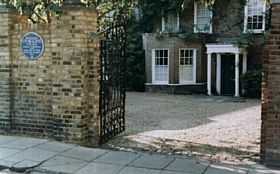 more self catering near Richmond-upon-Thames...

Days Out in Richmond-upon-Thames

Places to Visit near Richmond-upon-Thames