You are here:  Towns -> Places to Visit in Tyne and Wear -> Jarrow

Jarrow is a town steeped in history - there was a Roman fort here in the first century, and the site was occupied by the Anglo-Saxons in the 5th century.

With the Venerable Bede, who had his home at the monastery of St Paul, Jarrow was renowned as an international religious centre in the 7th century.

The ruins of the Monastery are now associated with and partly built into the present-day church of St. Paul, which stands on the site. 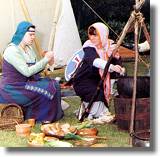 Near to the monastery there is a working museum called "Bede's World", dedicated to the life and times of Bede.

In 1936 Jarrow was the start of the famous Jarrow crusade to London, which was a protest against the mass unemployment in Britain at the time.

Days Out in Jarrow

Places to Visit near Jarrow