You are here:  Towns -> Places to Visit in Tyne and Wear -> Cullercoats

Things to do in Cullercoats, Tyne and Wear 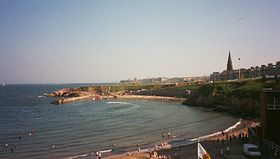 Cullercoats is part of North Tyneside, situated on the coast between Tynemouth and Whitley Bay. This coastal community of around 9,400 residents overlooks a sandy beach from its cliff top position.

Cullercoats was once a thriving fishing village with 150 open-topped fishing boats locally known as cobles. The fleet is now much reduced with a few fishing boats bobbing in the harbour.

The area also had coal mines and salt pans, although both these trades have now ceased. The port was built to export the salt and coal until the arrival of the railway made rail transport far more efficient.

Cullercoats played an important part in the development of the RNLI. When a boat capsized in 1848 while taking a pilot out to a ship at sea, the Duke of Northumberland funded a local lifeboat station in 1848.

Sadly a year later the lifeboat sank and 20 local crewmen drowned. The Duke then initiated a competition to design a self-righting lifeboat and the Percy was duly commissioned by him. It served in Cullercoats from 1852.

The lovely Watch House was built in 1879 and the Volunteer Life Brigade assisted coast guards in keeping watch of the shores to prevent shipwrecks and spot ships in distress.

In the 1880s Winslow Homer, a watercolour artist, lived and worked in Cullercoats along with several other artists who established an artists' colony in the village. Winslow stayed at the Bay Hotel, now demolished, but his name is on the apartments built on the site at Winslow Court.

Cullercoats Bay is a sandy cove at the base of some impressive cliffs which have some sea caves for exploring. Down on the harbour is the Dove Marine Laboratory, a research lab which belongs to Newcastle University.

The new RNLI lifeboat station was built in 2003 and has open days and fund raising events from time to time.

Within the town a delightful row of colourful fishermen's cottages has been preserved on Simpson Street. Between the railway line and the beach the terraced housing dates back to Victorian times. Newer housing estates have been added along Broadway giving a mix of residential housing.

St George's Parish Church has some interesting Gothic Revival architecture. It was built by the 6th Duke of Northumberland in 1884 and its 180 foot high spire was used as a navigational aid for shipping. It has four bells, a noteworthy organ and a choir.

The railway arrived in 1882 and the current railway station belonged to the North Eastern Railway. The line is now used by the Tyne and Wear Metro.

Things to do in Cullercoats

The beach with its golden sand is a major attraction to Cullercoats along with the promenade and quay. Families may prefer a soaking at the nearby Wet ‘n'Wild fun park with its water chutes, slides and lazy river.

For golfers, Tynemouth Golf Club is a mile away on the outskirts of North Shields.

The Royal Quays Outlet Shopping Mall is a popular place to visit in North Shields along with the Stephenson Railway Museum.

Tynemouth offers the Blue Reef Aquarium and an ice rink for family fun.

Days Out in Cullercoats

Places to Visit near Cullercoats