You are here:  Attractions -> Things to Do in Tyne and Wear -> Washington Old Hall 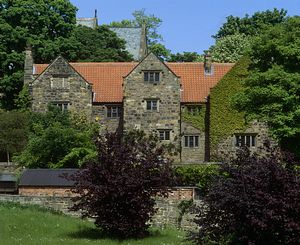 British and American visitors alike will enjoy visiting the Grade I listed Jacobean manor of Washington Old Hall which was once the ancestral home of George Washington, the first president of the United States.

The first stone hall was built on the site in 1183 by William de Hertburne, who changed his name to William de Wessyngton which eventually evolved into Washington. The family coat of arms was interestingly a shield with two stripes and three red stars, which were clearly of later significance.

In 1613 the family moved to Sulgrave Manor from where George Washington's great-grandfather, John Washington, emigrated to North America.

The current building was largely rebuilt of sandstone in 1613 by the new owner, William 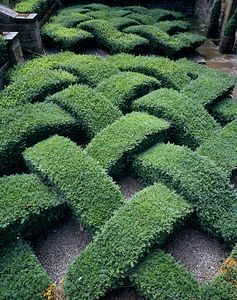 James, the Bishop of Durham. He built it for his son and it remained a fine, moderately sized family residence until the 19th century.

After being converted into flats, Washington Old Hall eventually fell into disrepair and was only saved from demolition by a local teacher, Fred Hill, who organized a group known as the "Friends of the Old Hall" to raise funds to restore this piece of English-American history. The work was completed in 1955 and the Old Hall was handed over to The National Trust in 1957, although there is still an active groups of supporters who run the tearoom.

This stone manor is very picturesque with its south facing walls covered in Boston ivy. Beyond the iron gates is a striking knot garden and informal lawns which are an oasis of tranquility, making it a great day out whatever your particular interest. The old magnolia tree with its waxy leaves is an impressive feature and its white blooms in summer are spectacular. 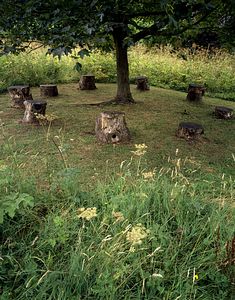 by the gentry following the English Civil War.

Note the twin arches between the hall and the kitchen which date back to the original medieval hall. The authentic furnishings are laid out as 17th century room settings with flagged floors and raftered ceilings.

An oak staircase, carved oak furniture and excellent oil paintings decorate the family home. Exhibitis and souvenirs of George Washington and his role in the War of Independence are on display in various rooms.

The 2.5 acre wilderness garden is in the form of a 17th century Mead which would have been used for games and relaxation by the medieval lords and ladies. There is a herb garden and a shady nut orchard for pleasant strolls and picnics where annual celebrations take place to celebrate American Independence Day on the Fourth of July.

President Carter visited Washington Old Hall during his visit in 1977. Two stone eagles, a bicentennial gift from an American in 1976 stand over the parterre, and the ornamental cherry tree was planted in the gardens in remembrance of 9/11.

Days Out near Washington Old Hall