You are here:  Towns -> Places to Visit in Devon -> Ilfracombe

Things to do in Ilfracombe, Devon

The Victorian resort town of Ilfracombe is on the North Devon coast, 11 miles north of Barnstaple. Set in a sheltered bay beneath steep cliffs; it has a small harbour. 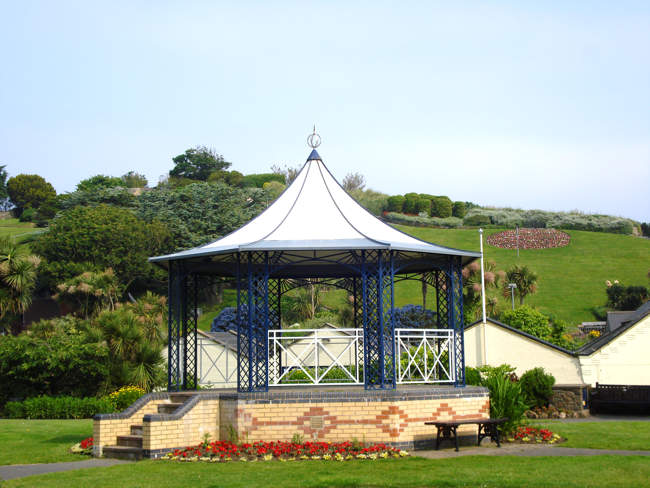 The bandstand near the seafront

Hillsborough Hill which overlooks the harbour is the site of an Iron Age settlement established by the Dumnonii Celts.

The town was recorded in the Domesday Book in 1086 as belonging to the manor at Chambercombe.

It was owned and built by a Norman knight, Champernon, a supporter of William the Conqueror.

Historically the town was an important port on the Bristol Channel with established trade routes to Tenby and Ireland. 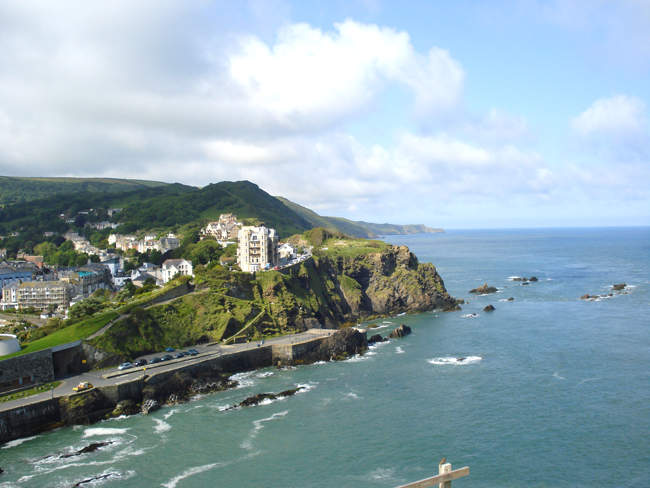 In 1208 it provided ships and men for King John to invade Ireland and later sent six ships and 79 men to enforce the siege at Calais.

One of the oldest buildings in Ilfracombe is St Nicholas Chapel on Lantern Hill.

Built in 1361, it is the oldest working lighthouse in the UK, having provided a beacon for ships ever since.

Diarist and writer Fanny Burney recorded life in Ilfracombe in 1817 when she stayed in the town. 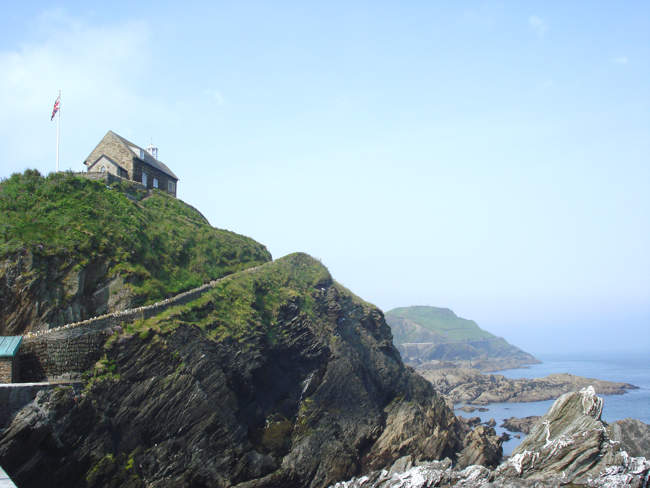 Her diary describes two ships in distress in a storm; along with everyday life in the town including a captured Spanish vessel.

The first lifeboat arrived in 1828. The more modern RNLI lifeboat station was built on Broad Street in 1996.

Ilfracombe was a popular resort in Victorian times as the many former guest houses indicate. Many have since been converted into flats.

Ilfracombe is a hilly town with a High Street of small shops, banks, a supermarket and a post office.

There are several pubs, cafes and restaurants serving the many visitors.

The focal point on the seafront is the harbour which always has a collection of leisure and fishing boats bobbing in the waves. 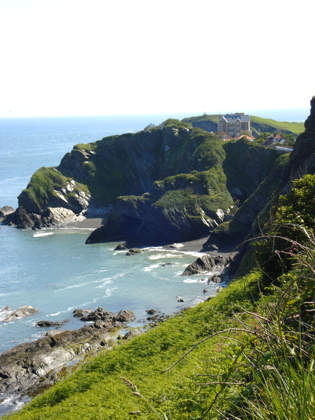 Two of the main landmarks are St Nicholas Chapel on Lantern Hill and the more recent Landmark Theatre with its modernist architecture.

Tunnels Beach is reached via a tunnel blasted through the rock by miners in 1820.

There is an old bathhouse and a seawater swimming pool for bathing.

Originally there were two pools for segregated bathing in accordance with strict Victorian social values. 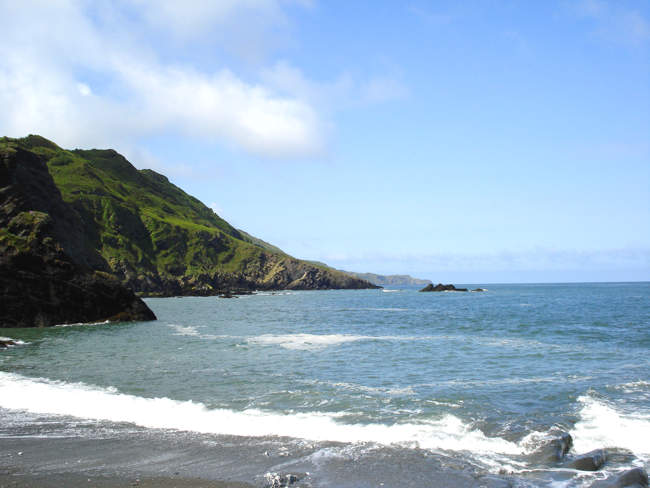 Looking West from the Tunnel Beaches

Famous visitors include Joan and Jackie Collins, actress and writer, when they were evacuated from London in World War II.

Henry Williamson, author of Tarka the Otter, lived in Britannia Row and actor Peter Sellars got his first break on stage in Ilfracombe.

Things to Do Around Ilfracombe

Ilfracombe offers many scenic walks including the South West Coast Path which runs along the clifftops to the neighbouring village of Lee. 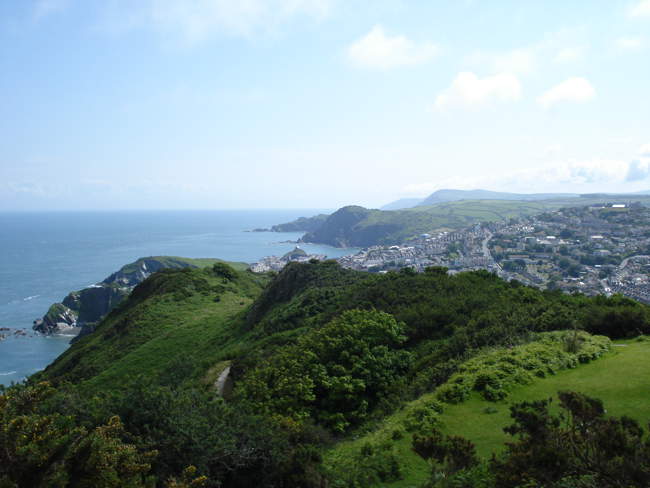 View from the Tors Footpath

The Tarka Trail offers a cycleway through the countryside on the former railway.

Exmoor is just 9 miles away with breathtaking scenery, wildlife and wild Exmoor ponies.

The National Trust property of Arlington Court is nearby. Take a tour of the magnificent Regency mansion before exploring the Carriage Museum and seeing a display of carriage driving with the Shire Horses. 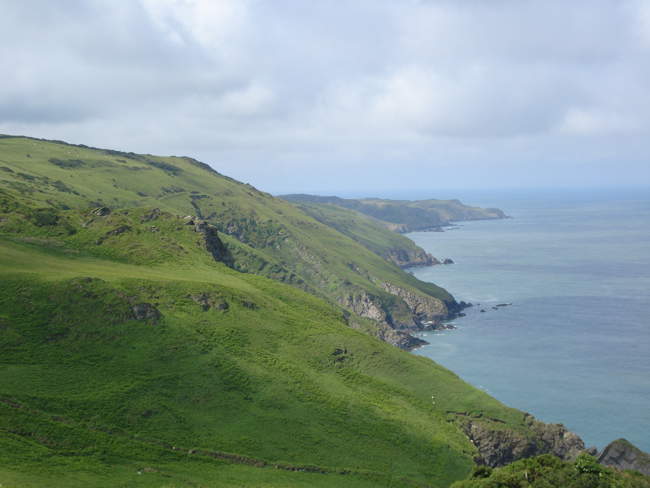 View from the Tors Footpath

Nearby attractions include the straggling village of Combe Martin with its sandy cove and the famous Pack O'Cards Inn.

It is a unique Grade II listed monument built in 1700 from the winnings of a card game.

Families will enjoy visiting Wildlife and Dinosaur Adventure Park, where there are plenty of real live animals to see apart from the Dinosaurs!

Barnstaple has an interesting town centre, shops and a historic pannier market.

Days Out in Ilfracombe

Places to Visit near Ilfracombe