You are here:  Towns -> Places to Visit in Devon -> Barnstaple

Things to do in Barnstaple, Devon 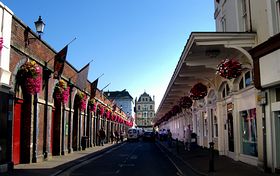 Barnstaple is a town of just over 20,000 residents in North Devon. Situated on the banks of the River Taw, it is 34 miles northwest of Exeter.

Barnstaple claims to be the UK's oldest borough with a charter given in 930AD by King Aethelstan. By 1086, when the Domesday Book was being compiled, it already had its own mint and had been a staple port exporting wool since the early Middle Ages.

In the 11th century a wooden castle was built and existing housing was cleared to make room for it. Henry de Tracey was probably the one who later added stone buildings to the compound. By 1326 they were just ruins and the stone was removed and used for other buildings. All that remains today is the tree covered mound or motte.

Long Bridge was built across the river in 1280 and still carries traffic today, although it has been widened. It is a Grade I listed building.

Barnstaple was often called "Barum", possibly of Roman origin, and was referred to as such by William Shakespeare. Barum was also used as the trademark on pottery produced in the town by Brannam's Pottery.

This important port developed good trading links with America. It also sent five ships to fight against the Spanish Armada in 1588.

Barnstaple developed in a haphazard fashion over the centuries with some surviving historic buildings such as the 14th century St Anne's Chapel, Queen Anne's Walk (1609) and the Georgian Guildhall. Most of the town's architecture dates back to the 19th century and has many fine buildings and attractive narrow alleyways.

Barnstaple is the main shopping town for North Devon and has many chain stores in the pedestrianized Green Lanes Shopping Centre. The Pannier Market was built in 1855 with iron columns and glass roof. It is open six days a week with different themes each day from crafts and books to general produce.

The Butchers Row was built at the same time on the opposite side of the road from the market and it stretches for 98 metres. Originally all ten shops were butchers, but they now sell diverse local produce including fish and fresh flowers.

Most of the local employment is in local retailers, at the Royal Marines base at Chivenor and the North Devon District Hospital.

Things to Do Around Barnstaple

The Museum of Barnstaple and North Devon is worth a visit if only to admire the building with its decorative fireplaces and mosaic floor. Exhibits covers local history and there is a Regimental Collection of the Royal Devon Yeomanry.

The 32-mile long Tarka Trail can be explored on foot or bicycle through the North Devon countryside. It brings to life the landscapes immortalized in Henry Williamson's novel, Tarka the Otter.

The National Trust-owned Arlington Court and the National Trust Carriage Museum is a huge estate with guided tours around the Regency mansion, beautiful Victorian gardens, a conservatory, a collection of horse-drawn carriages and several Shire horse demonstrations.

Ferries sail to Lundy Island in the Bristol Channel from nearby Bideford. The island is a bird sanctuary and nature reserve with the remains of some historic buildings.

Days Out in Barnstaple

Places to Visit near Barnstaple