You are here:  Towns -> Places to Visit in Devon -> Instow

Things to do in Instow, Devon 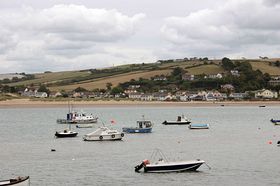 Instow is a charming village on the north coast of Devon. It is situated on the Torridge estuary opposite Appledore, where the rivers Taw and Torridge merge before emptying into the Bristol Channel.

Instow became popular with tourists during Victorian times and it continues to attract families and walkers during the summer to enjoy its coastal footpaths, beaches and local attractions. It has a post office, a thriving general store and delicatessen, two pubs, a couple of excellent restaurants and an art gallery.

The Torrington to Barnstaple Railway once ran through Instow. All that now remains is the 130 year old signal box, the only Grade II listed signal box which is now run by the Bideford Railway Heritage Centre. They offer open days when visitors can step inside and control the signals by turning the massive wheels and levers.

During World War II, Instow Sands were used for training the Royal Marines Amphibious Trials and Training Unit and for developing the amphibious landing craft which were used at the Normandy landings. An unexploded bomb was discovered near the dunes in 2000 and the village was evacuated before the bomb could be safely detonated.

The village of Instow overlooks the beach and is a cluster of old fisherman's cottages and larger houses which run along the waterfront. It currently has a population of around 780 residents. It enjoys a lively community spirit and there is always something going on.

The village is home to the North Devon Cricket Club which recently celebrated its 175th anniversary. The quaint clubhouse still has a thatched roof.

Along Marine Parade is the elegant lawned frontage of the Commodore Hotel which is popular for cream teas and local crab sandwiches on the seafront terrace. Many of the neighbouring cottages have colourful shutters and there is a bright mural in the boat park entitled the Leaping Salmon. It was created by local school children.

As well as the primary school there is a parish hall which is the centre of community activities such as the Women's Institute, the children's playgroup and various social activities. The Church of St John the Baptist is high above the village on Rectory Lane and close by are the remains of an old windmill.

The Bar pub provides food and refreshments and is conveniently located near the Tarka Trail exit on the former railway line. The Old Railway Station building is now used by the North Devon Yacht Club.

Things to do in Instow

The miles of golden sands and calm waters at Instow make it popular with families and boaters. There are stunning views across the Torridge to the shipbuilding community of Appledore and across the wider estuary to Braunton Burrows, a UNESCO Biosphere Reserve.

The Tarka Trail runs through Instow along the former railway line. Visitors can walk or hire a bicycle and enjoy the 40 miles of traffic-free Devon countryside.

Further along the coast are many popular villages such as Clovelly, known for its steep street running down to the port below.

Nearby is the historic town of Bideford and a little further are the beautiful 65-acre show gardens of RHS Garden Rosemoor at Great Torrington.

Days Out in Instow

Places to Visit near Instow