You are here:  Towns -> Places to Visit in Devon -> Braunton

Things to do in Braunton, Devon 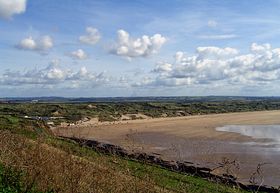 Braunton is situated in north west Devon, midway between Barnstaple and Ilfracombe on the A361. It is the Gateway to the beaches of North Devon, two miles from the coast. The Caen Stream runs through the town, a tributary to the River Taw.

The name Braunton comes from Saint Brannock who came to the area as a missionary from South Wales in 550AD. When he landed at Saunton Sands the estuary would have been heavily wooded, along with neighbouring Braunton Burrows.

He created the first Christian church in North Devon and the community which grew up around it was named Brannockstood which evolved into the name Braunton by the 19th century.

Legend has it that the location of the church was shown to St Brannock in a dream and was where he found a sow with a litter of piglets. This theme is reflected in the later St Brannock's Parish Church, built in the village in the 13th century. Up on the roof bosses there is a carved scene of a sow and her litter.

Braunton was once a port in its own right. By the time of the Norman Conquest, it was a royal manor. The village gradually expanded to its present size with a current population of around 7,500.

Braunton is a lively village, it has plenty of tourist facilities including several surf shops. It has good shopping, cafés, pubs and restaurants making it a popular base for exploring the North Devon coast.

The village has a Tourist Information Centre with delicatessens, gift shops and art galleries. Close by are the narrow streets of the old village overlooked by the ruins of a former chapel. The 6th century parish church testifies to the exceptional age of this charming village.

Braunton Great Field is a rare example of a mediaeval open-field strip farming system. It covers 350 acres and is divided into strips, each separated by narrow grassy banks or paths.

To the south is Braunton Burrows, a UNESCO Biosphere Reserve of sand dunes which are home to 500 species of rare plants, orchids and fauna. Along with the nature reserve is a local golf course and a Ministry of Defence rifle range.

Things to Do Around Braunton

Braunton has a Countryside Centre and a small museum which has exhibits on the local themes of farming, fishing and shipping.

A visit to Braunton Church is well worth doing. It has some of the finest 16th century bench-end carvings in the UK and other noteworthy Jacobean woodwork.

Braunton Beacon is at the top of West Hill. It is a pleasant walk with rewarding views of the Braunton Great Fields and the nearby nature reserve at Braunton Burrows.

The Tarka Trail passes nearby and offers a network of walking and cycling trails which run along the estuary to Barnstaple and Torrington. The South West Coast Path

Saunton Sands is close to Braunton and has a car park, café and beach facilities serving the three mile stretch of fine golden sands. The Atlantic waves provide good surfing although there are dangerous currents at the south end of the beach. The Saunton Sands Hotel is an interesting architectural building from the 1930s.

Days Out in Braunton

Places to Visit near Braunton