You are here: Articles -> British Kings and Queens -> Queen Boudicea 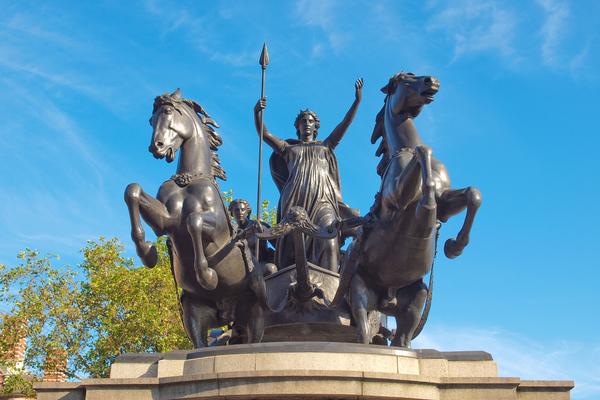 In The Midlands, a Roman road has just witnessed the slaughter of an Iceni queen and her followers. This queen was named Boudicea and she started on the journey to destruction in AD61 Iby annihilating the Roman town of Camulodunum. What quarrel did Queen Boudicea and her tribesmen have with the Romans?

Little information is available about Boudicea's childhood although it's believed she was married to the ruler of the Iceni tribe in AD47. This Celtic tribe lived in what is now present-day Norfolk and they were ruled by Prasutagus.

Queen Boudicea, King Prasutagus, and their two daughters, led a peaceful life. They even came to an amicable financial arrangement with the Roman Emperor Claudius. To satisfy this debt, Prasutagus willed a portion of his kingdom to Emperor Nero, Claudius' successor.

Upon the death of Prasutagus the Roman tax collector in Londinium (London) interpreted the will of Boudicea's husband in a dire fashion. Catus decided the will was offering all the Iceni lands to Rome., not just partial. Roman officials, Catus, and troops arrived to take full possession.

As the goods of wealthy Iceni's were taken from them and lesser folks were sold into slavery, Queen Boudicea's two daughters were raped. Boudicea herself was beaten.

The Queen of the Iceni's wanted revenge. Uniting with the Trinovantes tribe who were disgruntled by the land-grab of Rome, the Roman settlement of Camulodunum was the intended first target.

Present day Colchester found itself overrun by thousands of angry Celts, all lead by Boudicea. According to mythology, she led her troops via chariot, her long red hair streaming in the wind, and with her daughters kneeling on the platform behind her. The ill-defended city didn't have a chance.

Londonium was next. With reportedly 100, 000 soldiers under Queen Boudicea's command, the city was burned and its citizens were subjected to horrible tortures. Evidence of this battle can still be seen in a layer of earth uncovered by modern archeologists.

After Londinium, St. Albans was the target. It fared as (un)well as Colchester and London. By this time it is estimated that over 70, 000 Romans and sympathetic-to-Rome tribesmen had been annihilated.

Having achieved a victory over the Druids in Wales, Roman Officer Suetonius received word about the destruction of London and St. Albans. He immediately gathered his troops and made his way east to force a final confrontation with Queen Boudicea.

By raiding communities only populated by citizens, Boudicea's victories were assured just from force of numbers. However, her troops had no military discipline and were not equipped to face a Roman army. Having also failed to capture any military installations, her food supply was extremely low and supplies were scarce.

The final battle is believed to have taken place between Towchester and Wall. Boudicea's army was forced to fight uphill which made them very vulnerable. Being tired and hungry, they were soundly defeated by the Romans.

There are many theories as to how Queen Boudicea died. No account offers the suggestion she was killed in the battle. Most historians feel that she returned to Norfolk where she took her own life, and the lives of her daughters, rather than being taken prisoner by Rome.