You are here:  Attractions -> Things to Do in Lincolnshire -> Tattershall Castle 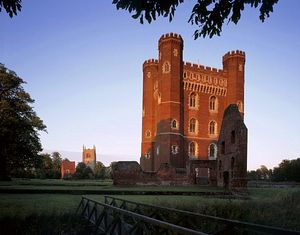 For those who like to explore a property at their own pace, Tattershall Castle is ideal as all visitors receive an audio guide to help them explore this unique building.

Tattershall Castle was built in 1434 for Ralph, Lord Cromwell. He was the Lord Treasurer to Henry VI and used his influence to build himself this medieval castle as a status symbol of his influence and position.

According to records, the tower and outbuildings of Tattershall Castle required nearly one million bricks which were made locally. The traceried windows picked out in white stone are quite lovely. 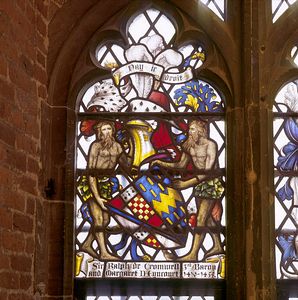 the origin of the castle's name.

The fine red brick tower house is six storeys high from basement to battlements and from the 110-foot high roof there are wonderful views of the Lincolnshire countryside. Look for Lincoln Cathedral to the northwest and the church tower of the Boston Stump to the southeast. The walls at battlement level are an incredible 13 feet (4.5m) thick.

On the way up the 150 steps of the staircases, pause to explore each of the four great chambers with their tapestries and décor. The magnificently decorated chimneypieces are the centrepiece of each room with their colourful heraldic decoration. The vaulted passageways are quite superb, considering their age. Indeed, the castle is deemed to have some of the best surviving brickwork of its era.

The basement was used as a storeroom and as a dungeon for prisoners during the Civil War. Outside, the inner courtyard has restored cloistered walkways and beautifully proportioned crenellated towers. The guardhouse and outbuildings house an interesting museum along with a National Trust gift shop and café.

Tattershall Castle has no formal gardens as such, but the tiltyard, where jousting would have taken 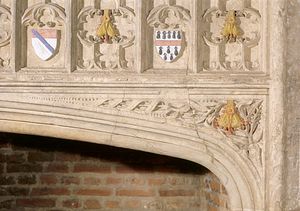 After Cromwell's death in 1456, Tattershall Castle fell gradually into disrepair. The ground floor was used to shelter cattle and they used the grand chimneypiece as a scratching post, hence its worn appearance!

We have George Nathaniel Curzon to thank for saving this historic monument from demolition in 1910. He completely restored the tower and left the property to the National Trust in 1925, when he died.

The tower still has its original inner and outer moats which are fed by the River Bain. These were also restored by Lord Curzon between 1912 and 1914.

The village has many connections with the castle, including the remains of Tattershall College which was a school for choristers.

The 15th century church was also built by Lord Cromwell, right next to his castle which rather dominates it. The church has some of the finest stained glass windows from this period and also the unmarked grave of Lord Cromwell who was buried here. In the floor there is also the grave of the legendary Tom Thumb who supposedly lived in a tiny house which can still be seen nearby.

Days Out near Tattershall Castle

Places to Visit near Tattershall Castle