You are here:  Attractions -> Things to Do in West Yorkshire -> Nostell Priory 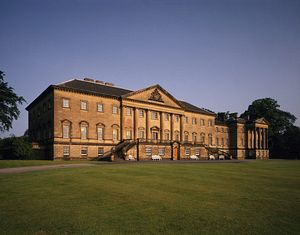 The original Nostell Priory was founded more than 800 years ago and was dedicated to St Oswald, who first brought Christianity to Britain. The simple Cistercian Abbey was the home of the Augustinian Brothers until the Dissolution of Monasteries in 1540.

The Winn family acquired the estate in 1650 and eventually replaced the church and buildings with an impressive new hall in the early 18th century.

In 1735, Sir Rowland Winn, the fourth Baronet, made plans for a new Palladian building based on the Villa Mocenigo in Italy. The original Rococo designs by James Moyser and James Paine were later adapted by Robert Adam in 1765. His surviving neo-classical style can best be seen in the Library, the 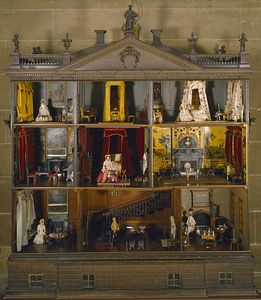 Main Saloon and in the Tapestry Room with its delicate ceiling paintings.

The sweeping staircase leads up to the first floor where most of the main rooms are situated, in typical Italian villa style. The elegant Top Hall has a beautiful stone chimneypiece by Theakston and a colza oil chandelier circa 1819.

Many of the furnishings were specially commissioned and supplied by Thomas Chippendale who lived at nearby Otley. The delightful 6-foot high fully furnished doll's house which is on display at Nostell is believed to be the work of Chippendale. He also designed the library steps which are cleverly designed to collapse into an ottoman.

Other notable pieces for visitors to enjoy are the John Harrison long-case clock with its wooden movements and Holbein's painting "The Family of Sir Thomas Moore". Other paintings on display at Nostell are by Brueghel and Kauffmann.

The large State Bedchamber was originally used as a Music Room and has musical motif decorations as well as Indian style wallpaper and decorative chinoiserie furnishings.

The gardens and park at Nostell Priory are equally 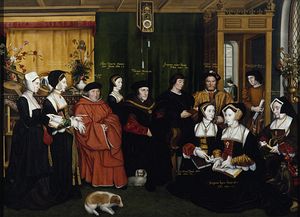 magnificent. The 300-acre grounds were laid out in 1731 by Stephen Switzer and the lodges, garden buildings and gates are attributed to Robert Adam. A small Gothic building known as the menagerie can be seen in the park and the bridge was designed by Sir George Savile in 1761.

The grounds include pleasant lakeside walks around the parkland and orchard. There is also an adventure playground for children, a National Trust gift shop and tea rooms.

Visitors are fascinated by the pond which was a former pit for cock fighting. The high banks around the pond still retain the seating in the grassy banks which were used by spectators at the cockfights.

In 1980 a disastrous fire badly damaged the Amber and Breakfast Rooms which have since been restored to their original state, based on Paine's original drawings.

The house was transferred by the Winn family to the National Trust in 1953 and the Chippendale furniture and other contents were donated in 1986. The stately home continues to be managed and lived in by Lord St Oswald today.

Days Out near Nostell Priory

Places to Visit near Nostell Priory