You are here:  Towns -> Places to Visit in Suffolk -> Southwold

Southwold is a coastal Suffolk town which looks out over Sole Bay. There are various features in the town including the 110 foot lighthouse - unusually placed in the middle of the town; Award winning beaches; Southwold Pier; Gun Hill which features some impressive Elizabethan canon; Southwold Museum and the fifteenth century St Edmund's Church.

The famous Suffolk Brewery, Adnams is now based on the outskirts of Southwold. Formerly in the centre of the town, its black shire horses used to pull drays of beer to the local hostelries.

Southwold featured in the Michael Palin dram "East of Ipswich" where the beautiful beach huts were shown in all their glory. 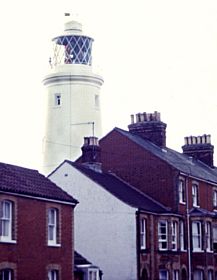 Southwold Lighthouse - unusually situated in the middle of the town! © Diana Hitchin

more self catering near Southwold...

Days Out in Southwold

Places to Visit near Southwold