You are here:  Attractions -> Things to Do in Suffolk -> Beccles & District Museum 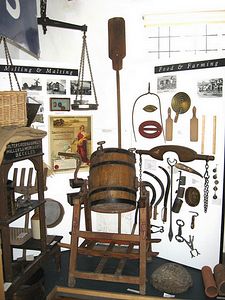 
The Museum is housed in Leman House which was probably built around 1570 and was completely restored and modernised in the 1760s.

Originally, it was a timber frame structure, much of which disappeared when the brick facades were added. What remains shows minimal decoration, but shows the classic features of a mid to late 16th Century building, including a series of fine Queen Post roof trusses.

In the 1760s the facade facing the street was built of flint and brick, and pantiles were substituted for the previous thatched roof.

It was also at this time that the Gothic shaped windows were introduced. When Sir John Leman gave the building to the town in his will in 1631 it was already a school.

The payment of the master and usher came from lands outside Beccles which he gave at the same time for their support. The foundation was for 48 boys who must have been able to read and write before entry. They were to remain at the school for four years. The Free School closed in 1905.

Among the displays in the old schoolroom are those that tell the stories of the importance of milling and malting as well as the food and farming industries in the town. Displays of costume, toys and wartime memorabilia can be viewed.

Many other topics are covered including printing, transport, engineering, health care, the prison and workhouse, education and the Churches. Beccles is on the River Waveney and "The Waveney Room" shows the local history of the beautiful Waveney valley. The story is revealed of the distinctive single sail "Wherries" and the tidal lock at Geldston.

For many centuries Beccles was one of the most important towns in Suffolk. This is reflected in the number of clock and watch makers operating from the town, from the 17th Century onwards. Two fine old grandfather clocks made in Beccles can be seen. Details on most makers and some photographs of clocks are on file at the museum.

The museum has hundreds of old photos and documents as well as a large historical database that includes family histories. Small geological and archaeological displays can be seen as well as a temporary "special exhibition" which is changed at least twice a year. This covers a variety of topics maybe relating to one of the local villages, or perhaps one of the many local industries.

In 2009 the museum received a number of items relating to Sir John Leman. These are part of the Rosalinde and Arthur Gilbert collection, and are on loan from the Victoria & Albert Museum in London.

They include a portrait dating from 1632 by the Dutch artist Levinus de Vogelaare, his gold signet ring, his silver seal and a folio of his procession in 1616 when he became Lord Mayor of London.

The gift shop offers unusual and attractive items for sale, many of which are made locally. Books and postcards of local interest, together with stationery, toys and educational material are special features.

Days Out near Beccles & District Museum