You are here:  Towns -> Places to Visit in West Sussex -> Singleton

Things to do in Singleton, West Sussex

Singleton is one of West Sussex's small and charming villages in the Lavant Valley. It is located just north of Chichester on the Midhurst road.

The name Singleton comes from the Anglo-Saxon for "burnt clearing". The Trundle Iron Age hill fort is an attractive mound nearby which is often used by spectators to see the Goodwood horseracing.

The village pub is a 16th century building which was once owned by the Fitzalan Earls of nearby Arundel. It was part of a huge deer park used for hunting.

In 1732 the inn was owned by the Duke of Richmond and included a barn, stables, brewhouse and garden. It closed in the late 1700s and reopened again in the 1840s to serve the local farm labourers, something the local Rector complained to the Duke about as being a "den of iniquity".

During the early days of the Goodwood Race Week, Singleton would have housed many visiting horses, jockeys and stable hands with every stable and cottage offering accommodation. The pub at that time had a "try-your-strength" machine set up in the front yard.

The town had its own railway from 1880 to 1953 to serve the racecourse. The station is now a charming private residence.

In the 2001 census, Singleton had just 476 people residing in 199 homes. It has a thriving cricket club with an attractive clubhouse and a small primary school.

The pretty village has thatched cottages and two ponds. It is centred around the 10th century Saxon church which has a square crenellated tower with massive walls; three windows illuminate the tower. A Saxon doorway once gave access to a room above the nave which may have been the priest's living quarters.

In the 12th century the tower arch required rebuilding. The old pews date back to Tudor times.

The village pub is The Partridge which has some pretty gardens and serves excellent local food.

Most surprisingly an oil well has been found on the north side of the village in Singleton Forest.

Things to Do Around Singleton

On the edge of the village is the Weald and Downland Open Air Museum of Historic Buildings which is well worth a visit. It has over 40 historic buildings which have been saved from destruction, dismantled and reconstructed on the site. It is run mainly by volunteers.

Goodwood House and Country Park is to the south of the village. It has a picnic area with grassland and woods. The Monarch's Way long-distance footpath runs through the park and is a popular walk for visitors.

Next door to the park is the well-known Goodwood Racecourse which hosts the King George Stakes and the Goodwood Cup, a highlight of the British flat racing season for horseracing.

Levin Down is an important nature reserve run by the Sussex Wildlife Trust. The chalky scrubland has many wild flowers which are the home of rare butterflies and insects. A short climb to the top of the hill gives great views of the area.

Further away, Arundel Castle, Petworth House and Chichester Cathedral offer some excellent days out near Singleton. 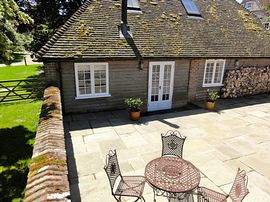 more self catering near Singleton...

Days Out in Singleton

Places to Visit near Singleton