You are here:  Attractions -> Things to Do in West Sussex -> Uppark House and Garden 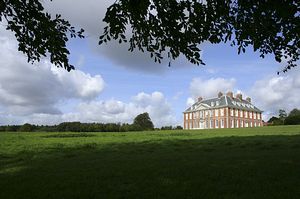 
Like many National Trust properties, Uppark House is not just about the historic house and gardens, but also the fascinating lives of those who have lived there.

This stately home was built in the South Downs for the duplicitous Lord Grey in 1690. Its very existence would have been impossible at that time were it not for an invention by Lord Grey's grandfather. He developed a method of pumping water to great heights which was necessary to supply Uppark House with water as it is situated right on the crest of a hill.

The magnificent red brick home is in Dutch style and is thought to have been built by William Talman. From its hilltop position it enjoys superb views across 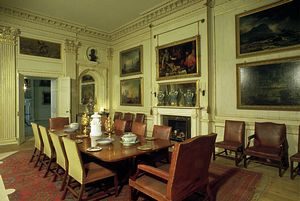 this area of outstanding natural beauty.

The rich interior of Uppark House is a delight to visit and is the legacy of Sir Matthew Fetherstonhaugh who bought Uppark House in 1747. He used some of his vast fortune to redecorate most of the rooms. He and his wife Sarah then went on a Grand Tour of Europe from 1749-1751 which was a giant buying spree to fill the house with a magnificent collection of carpets, furniture and works of art.

The hauntingly beautiful gold and white saloon with its plaster ceiling, ivory silk brocade curtains and paintings gives an idea of their good taste and limitless resources. The fireplaces with their inlaid sienese marble depicting the legend of Romulus and Remus are well worth pausing to take in.

It was Sarah Fetherstonhaugh who owned the 18th century doll's house which is a feature of Uppark House. It is perfectly made with miniature works of art on the tiny walls, hallmarked silverware on the table and minute fire irons in the hearth.

The sporting pictures and silver-gilt trophies around Uppark House were collected by their son, Harry, whose love of hunting was only matched by his love of entertaining.

The Prince Regent was a frequent guest, and at one of the parties the future Lady Hamilton, Emma Hart, danced on the dining table shortly before Sir Harry dismissed her from his life. Harry remained single until he was 70, and then married the dairymaid who inherited Uppark House when he died.

The Victorian kitchen is laid out as it would have been in the time when H.G.Wells' mother was the housekeeper, from 1880 to 1893. She took the job to support the family when her husband, a professional cricketer, broke his leg and could no longer work.

The young Herbert had access to the library and made use of it to improve his education whilst working at various manual jobs. Uppark House was certainly the model for some of his settings in his sci-fi novels. A tour of the cellars with their ventilation shafts no doubt inspired the idea of the Morlocks' underground world in "The Time Machine".


Although the house and contents look just as they did in former times, the setting hides all evidence of the devastating fire which destroyed much of the house's interior in 1989. Fortunately the furniture and irreplaceable paintings were rescued but many personal family treasures were lost. The painstaking restoration took 5 and a half years to return Uppark House to its former glory.

A walk around the grounds will reveal the elegant white tiled dairy and the Gothic summerhouse which were the work of Humphry Repton, who also designed the pillared portico.

The peaceful gardens make the most of the woodland setting and the South Downs scenery. The park grounds also have their own ruined folly, Vandalian Tower.

Days Out near Uppark House and Garden

Places to Visit near Uppark House and Garden