You are here:  Towns -> Places to Visit in West Midlands -> Oldbury

Things to do in Oldbury, West Midlands 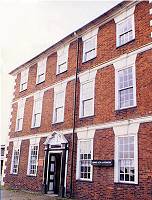 Oldbury is at the centre of Sandwell, both geographically and as the site of the borough's Council House. The town dates from the 13th century, and for most of its history it was part of the parish of Halesowen in Worcestershire.

Oldbury Manor was owned by Halesowen Abbey, the first mention of the manor house was in the 15th century, when Robert Dudley settled there with his wife Amy Robsart. The manor was taken over by the Cornwallis family in the early 1600's. In the mid 18th century the original manor house, which dated from the 14th century, was demolished, leaving Oldbury's the Big House in Church Street as the town's most historic building. The Big House was built in 1705, and was originally the home of the Freeth family, from where Freeth Street in Oldbury and Walsall got their name.

With the arrival of the Canals in the 18th century, Oldbury developed into an important industrial town. The ease of transport and local deposits of coal and iron attracted the new breed of industrialists. First of the new factories was Brade's in the late 1700's, and then came Arthur Albright's phosphorus works in 1851 and the John Wheeler iron foundry in 1861. By the mid 1800's Oldbury's industrial portfolio also included steel making.

Today Oldbury is a totally modern town, Old and new face each other across the town's central square, on one side the ultra-modern council House and the new retail park, on the other the traditional family shops of Birmingham Street, including the first branch of Lloyd's Bank.

Part of Church Square and Unity Place has been designated a conservation area, protecting it from inappropriate development, while the town's canals are increasingly being used for leisure, like angling and boating, and a major reclamation project has turned the picturesque Titford Pool into one of the area's top beauty-spots.

more self catering near Oldbury...

Days Out in Oldbury

Places to Visit near Oldbury