You are here:  Towns -> Places to Visit in West Midlands -> Rowley Regis

Things to do in Rowley Regis, West Midlands 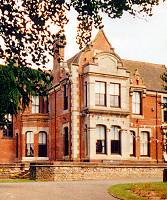 The secret of Rowley Regis' success is its firm foundations.

The Romans first came to the area 2,000 years ago, attracted by the hard rock of the Rowley Hills; the legacy of quarrying is still part of the local landscape.

In the early Middle Ages the King owned the area, though the designation Regis has its origins in the 14th century, when the then-owner divided his estate between his two sisters when he died.

One part - Rowley Regis - later passed, like Oldbury, to Halesowen Abbey, while the other part - Rowley Somery - became one of the Dudley family holdings.

The town's first industries were nail making and coal mining, which started in the 13th century, by the 19th century chain making - Joseph Parkes is one of the town's most famous sons - was also a major employer.

By then three firms of engineers - Samuel Woodhouse, Benjamin Priest and William Griffin - had started quarrying on large scale.

Only one quarry is still working the hills, which are now one of the borough's top leisure attractions.

With spectacular views - local legend has it you can see the mouth of the Severn on a clear day - and a wide variety of wildlife.

Haden Hill House, a Victorian mansion bought by public subscription in 1921, is a focus for many of the borough's local historians.

The house was restored and the completed rooms are now used for seminars, arts and crafts activities, community functions and history events.

more self catering near Rowley Regis...

Days Out in Rowley Regis

Places to Visit near Rowley Regis