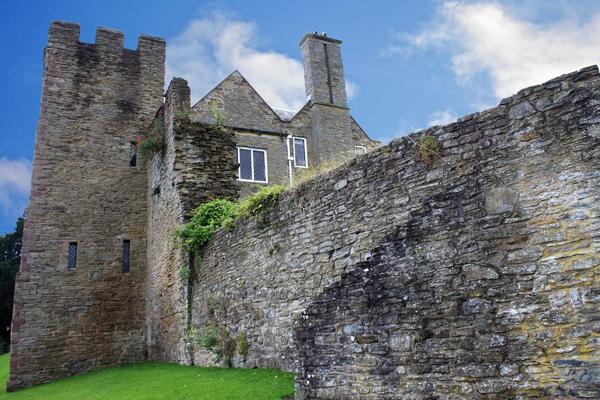 What steps brought this Princess of England from the sobriquet "Pearl of the Kingdom", spoken by her father, to "Bloody Mary", spoken by history?

Mary Tudor was the fifth child born to Henry VIII and Catherine of Aragon. However, instead of joining a house full of siblings, Mary was the only living offspring. Of her mother's six or seven pregnancies, Princess Mary was the only child to live beyond a few months.

By the time of her birth, her parents had been married seven years. With each of Queen Catherine's confinements, joyful anticipation would spring high... only to be brutally crushed by disappointment.

Mary's birth on February 18, 1516 at Greenwich Palace was a blessed sign that Catherine could bring forth a live, and healthy, child, even though she was a girl and not the hoped-for son.

Unhappily for Henry, his queen's final pregnancy resulted in a stillbirth. Chances were, his two year old daughter, "The Pearl of the Kingdom", was going to be his heir.

Treated with affection, looked upon with respect (and as a useful diplomatic pawn by her father), Mary Tudor soon began a heavy regimen of study. To her mother, the princess would be the next monarch of England and she would be educated as such.

Ludlow Castle found itself full of a viceregal court when Mary and her advisors were sent to Wales in 1525. Here was the first indication that the princess was being looked upon, in a serious fashion, as her father's heir. Monarchial training had begun.

Returning to court in 1527, however, Mary found a different woman standing by her father's side. Anne Boleyn had promised a son to whomever she married. The quest was on for a male heir. Catherine was out of favor... and so was Mary.

With her world darkening around her, and the respect and affection once shown to her nowhere to be found, Mary Tudor stood by her mother's side. The 'divorce' of her mother would not only deprive the person she loved best of the crown, but Mary herself would be proclaimed a bastard.

The next nine years changed Mary forever. Her principles were severely tested, and any chance of married happiness, and the possibility of children, was denied her.

She found herself vilified, and her title of "Princess" removed. There was a new princess in the kingdom... the daughter of Henry and Anne: Elizabeth. Hated and in fear for her life, Mary's existence was a misery.

Unhappily for Mary, her mother died at Kimbolton in 1536. It had been five years since Mary had seen her. Happily (from Mary's point of view), Anne Boleyn was executed in The Tower of London five months later. Now that all obstacles were gone, Mary felt that things would go back to normal.

But it was to be a rude awakening. Henry made it quite clear that his daughter was to submit to The Reformation, agree that her parents had never been married, and that she was a bastard.

Until Henry VIII died at Whitehall, Mary was welcome at court. In Henry's eyes, she had completely submitted to his rule, to his laws, and to the Reformed religion. Her dissembling was marvelous.

All pretense disappeared when her brother (by Henry and his third wife, Jane Seymour) Edward VI ascended the throne in 1547. Believing Edward was not old enough to decide about religion, Mary flaunted her Catholic beliefs, her crucifix, and had Mass said in her household. 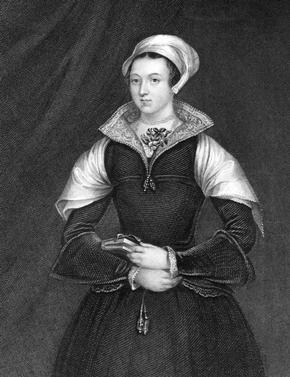 She was impervious to threats, bullying, snubs, and questions before the council. Eventually, Edward and his advisors stopped attempting to turn Mary to the 'proper' religion.

It was this non-submission to the tenets of Protestant Edward VI's court that made Edward extremely reluctant to leave the throne to his Catholic sister.

In his final illness, Edward wrote Mary (and his sister, Protestant Elizabeth) out of the succession. The crown was willed to their mutual cousin, the Protestant Lady Jane Grey.

Queen Jane reigned for only nine days. Mary Tudor might have been a Catholic, but she was in the proper line of succession. England turned Queen Mary's entry to London into a triumph.

But, the honeymoon was brief. Focusing entirely on her personal agenda, and totally misreading the attitude of her country, Queen Mary quickly turned her efforts to bringing England back to The Pope.

Grumbling was heard throughout the country, and the goodwill first felt toward the queen was rapidly turning into dislike. Running roughshod over all opposition, Mary brought Rome to the forefront once again.

Those who didn't hold with Mary Tudor's religious opinions quickly found their way to the stake. When Mary married Philip of Spain in Winchester Cathedral, it wasn't just heretics Mary ordered to be executed.

Rebels, dissidents, grumblers... commoners and churchmen alike fed the flames at Smithfield, or felt the headsman's axe. "Bloody" Mary had been born.

Like so much of her life, Mary spent her last years in grief and bewilderment. On November 17, 1558, Mary Tudor breathed her last at St. James Palace, London. Sorrowfully, she knew that her countrymen's eyes were all looking in the direction of Hatfield, and Elizabeth.