You are here:  Attractions -> Things to Do in Somerset -> Tyntesfield 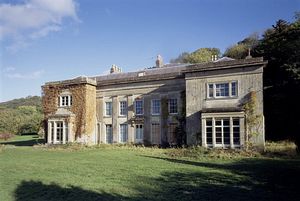 Tyntesfield House is one of the latest additions to the National Trust collection and was given to the nation by the Gibbs family in 2002. Described as one of Britain's greatest Victorian mansions it is built in grand gothic style and makes quite an impression on visitors.

The 43-bedroom house had been in the Gibbs family for more than two centuries. When the last Lord Wraxhall died in 2001 it was already on the "to be saved" list and the extensive renovations were funded by the National Trust and the National Heritage Fund which donated £17.5 million to the worthy cause.

The rise and fall in the fortunes of the Gibbs family is an interesting one. George Abraham Gibbs was 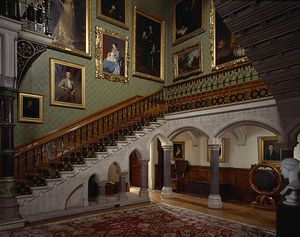 a surgeon in Devon in the early 18th century. His son Anthony was a shipping agent, but having lost the family fortune he left in disgrace for Spain.

Seeing the development of the Spanish Colonies he made great wealth moving valuable cargo and trading in guano as fertilizer. At that time many overladen ships sank so the company started drawing a "full" line on their ships which preceded the statutory "Plimsoll line" which is used in shipping today.

William Gibbs, Anthony's son, made a fortune in the guano business, married his cousin and in 1843 they bought Tyntes Place. Many of the artworks which can be seen on display today were collected by this wealthy couple who enjoyed travelling abroad.

Eventually they had Tyntes Place extended to almost double the size of the original house, and the result is the splendid Gothic building seen today. The floors were tiled by John Minton to copy an Oxford Museum and almost 30 different colours of limestone were used in the cloisters. The entrance was topped with a colossal clock tower. The library is lined with golden oak and was used by the family for amateur dramatics. 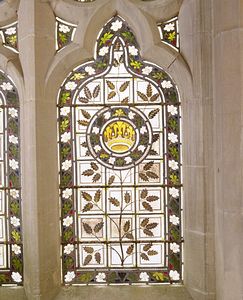 William was very religious and had a chapel built at the newly named Tyntesfield, which has fine stained glass and beautiful mosaics. Upon his father's death Anthony inherited the family home and made some improvements. It became the venue for costume balls, shooting parties and tennis on the lawn until he died in 1907.

During World War 1 Tyntesfield became a convalescent home for wounded soldiers and George and Victoria worked tirelessly for charity. Victoria received the CBE for her services to the Red Cross and died in 1920 aged just 39. George remarried and went into politics for a time.

The final family member was George's son, Richard, who spent more than 50 years at Tyntesfield gradually being forced to close off sections of the big house until his death in 2001.

Still only partly restored, this wonderful house is a real treasure to visit. Take an estate tour to see the wider estate. Enjoy the demonstrations each Wednesday in the Kitchen Garden, join walks around the estate and see the superb exhibition in the stable block. Tyntesfield is an excellent example of the ongoing work of the National Trust in the 21st century.

Days Out near Tyntesfield

Places to Visit near Tyntesfield