You are here:  Attractions -> Things to Do in Somerset -> Clevedon Court 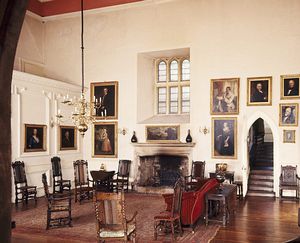 
Home to the Elton family and with a fine display of the family pottery, known as Eltonware, Clevedon Court reflects the many centuries and owners it has outlasted.

This fine mediaeval manor house was built in 1320 by Sir John de Cleveland just outside the seaside town of Cleveland itself. It incorporated an earlier 12th century tower and a 13th century Great Hall, now hung with generations of family portraits. The attractive mellow manor house has retained its mullioned windows, tall chimneys and steeply pitched roof and the portcullis groove can still be seen on the two-storey high porch. 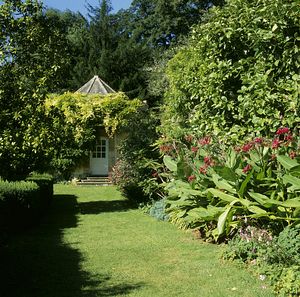 bought in 1709 by Abraham Elton, a Bristol merchant and prominent member of local society. He was the Sheriff of Bristol and later became the Mayor of Bristol, High Sheriff of Gloucestershire, Member of Parliament and, for his good deeds, was made a Baronet in 1717.

He invested the family income, made partly from the slave trade, on improving and extending Clevedon Court, although the mediaeval character of the house still remains intact.

A tour of the interior reveals small rooms with uneven floors and many stairs linking the add-ons over the centuries. The tallest part of the architecture is the four-storey high tower with arrow-slit windows which was probably part of Sir John's original manor house.

One unique feature of Clevedon Court is the engineering prints and engravings which decorate the boldly patterned Bodley wallpaper on the staircase. The sketches include engineering triumphs of their day such as the Clifton Suspension Bridge, the Iron Bridge at Coalbrookdale and a host of less well-known viaducts.

Crippled by death duties in 1961, the family donated the 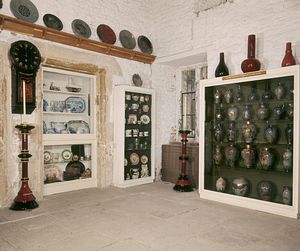 property to The National Trust but continue to reside in part of the house today.

Famous guests who have enjoyed Clevedon Court's hospitality include author William Makepeace Thackeray, a friend of the 6th Baronet in the mid 19th century, and poet Alfred, Lord Tennyson in 1850.

One of the Elton heirs, Sir Edmund, developed a unique metallic-glazed style of pottery in the 1880s from clay on the estate. It is known as Eltonware and a fine collection of pieces can be seen in the old kitchens at Clevedon. The family also has a fabulous collection of local Nailsea Glass which includes impractical glass walking sticks shot through with bright spirals of colour.

The Clevedon Court Chapel, dedicated to St Peter, has stunning stained glass by Clayton and Bell and also displays a floor-standing Eltonware candlestick.

Carved out of the hillside behind the manor are the beautiful terraced gardens with two summer houses, set against a backdrop of thick woods on Court Hill. The grounds also have a small tea room catering for thirsty visitors.

Days Out near Clevedon Court

Places to Visit near Clevedon Court