You are here:  Towns -> Places to Visit in Somerset -> Priddy

Things to do in Priddy, Somerset

At 800 feet above sea level, the Mendip village of Priddy is one of those rare places that can fairly be described as being more than the sum of its parts. 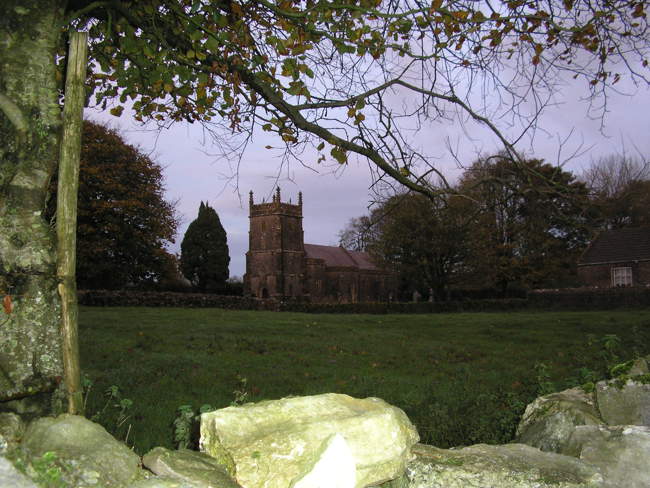 It is certainly a village of contrasts: it can be pretty and it can be bleak, often seemingly deserted and sometimes packed with visitors, steeped in tradition whilst in the vanguard of progress...and, always, just a little bit quirky.

Recorded as 'Pridia' in 1182, and as 'Pridie' in the 1219 'Feet of Fines' for Somerset, the village was so called from a derivative of the Celtic words 'Prith' and 'Tiz' meaning 'earth' and 'house'.

The village abounds with evidence of man's occupation of the land as history emerged from legend and by people whose marks on the landscape are still plain to see several thousand years later.

Priddy's 'Nine Barrows' (burial mounds) are visible on the horizon from many vantage points and legend has it that a golden coffin is buried in one of them.

Slightly further afield, close to the Castle of Comfort Inn, are the Priddy Circles.

These are four circular banks with diameters ranging from 490ft to 560ft in diameter, each with an outer ditch.

The circles are arranged north-northeast almost in a straight line, extending over three-quarters of a mile.

The circles are regarded as being Neolithic 'Henges' but unlike the famous Wiltshire Stonehenge, the Priddy versions were constructed of wood.

A number of major cave systems are to be found around the village, formed where water draining off the sandstone sinks underground on reaching the surrounding limestone.

Swildon's Hole is the longest cave on the Mendips, with over 5 miles of passages.

First descended in 1901, cavers are able to follow the stream through several water-filled sections to a point 500 feet directly below the Queen Victoria Inn!

The Priddy area was an important lead mining area from Roman times right up to the beginning of the 20th century.

The ore, principally 'galena', was won from veins in what is now Stockhill Forest. 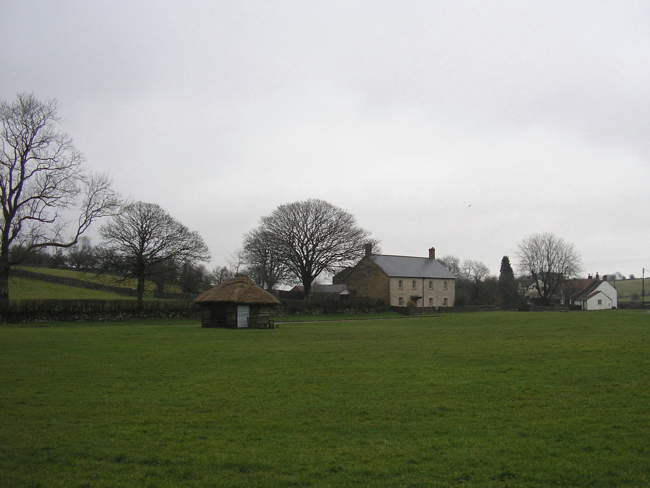 Numerous closed depressions pockmark the area and the remains of the lead workings with spoil heaps, pits, leats and reservoirs are still clearly visible in the valley between North Hill and the Stockhill car park.

This area lay between two mining ownerships known as 'liberties' with the Bishop of Bath and Wells the interested party in one and the Waldegrave family in control of the other.

A degree of caution is still required when walking in this area: it is prime 'Adder' country and there are still unfenced and rather deep holes in the ground!

In the centre of the village is its famous Green with the iconic thatched structure of ash sheep hurdles.

Locals believe that so long as this stack remains in place, the villagers will retain the right to hold their local events on the Green.

Traditionally, the story goes that the Sheep Fair was moved from Wells at the time of the Black Death in 1348.

Whilst this is possibly true, some experts believe that Priddy Sheep Fair is actually a great deal older than that and probably dates back to Iron Age times when hill dwellers lived in turf walled villages - or earth houses.

Thus Priddy in those days may well have supported quite a large population, which constructed earthworks, hill forts, barrows, Henges and even the odd Roman amphitheatre.

As a human settlement, Priddy most certainly predates Wells.

Priddy Fair is held on the Wednesday closest to 21st August each year and locals believe that the first rain after the event heralds the onset of winter.

So important an event was the Fair in medieval Somerset that it was selected as the first place in the County to have the 1352 Weights and Measures Act published - forcing traders to discard their private 'yardsticks' in favour of uniform standards of measurement.

As well as the Sheep Fair the Green also plays host to a variety of other events throughout the year: the July Folk Festival goes from strength to strength and there is nowhere better to be on Guy Fawkes night.

The Parish Church of St Laurence was dedicated in 1352 although the tower itself was built in the preceding Century.

Local benefactors are remembered in the Church: John Plummer died in 1736 (there is still a Plummer's Lane in the village) and left a considerable fortune that remains available to this day providing charitable assistance.

The pretty stained glass window in the church was a gift from the Gibbons family of Eastwater Farm.

It commemorates the life of their daughter Catherine and her much-loved pony is captured beautifully by the very talented glazier. 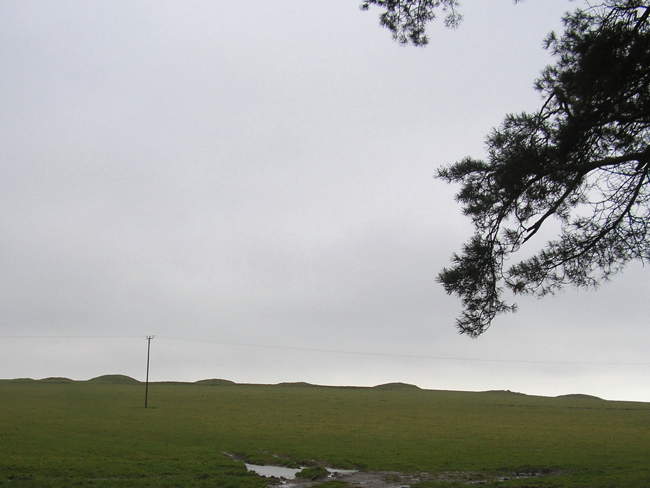 The church has an ancient altar frontal in a glass case, over 500 years old with very delicate needlework of iris-like flowers on fine Italian damask.

There is also a stone tablet on the wall with some quaint spelling telling us that 'this tower was mended and two pinikls in 1705'.

Perhaps not surprisingly for an isolated settlement at the centre of a mining district, Priddy's history is littered with lawlessness and rough justice.

In 1225 a Priddy man by the name of John Swete-bi-the-bone murdered Richard the Shepherd and went on the run.

He was outlawed and his chattels were seized but there is no record of him being caught.

The miners - or 'Little ol' Men' - would often resort to their own justice and were for many years a law unto themselves - this was the 'wild west' long before Columbus discovered America.

Set against such a rowdy and violent backdrop it should be pointed out that Priddy folk maintained their skill in 'step dancing' long after it died out elsewhere in Somerset.

Step dancing has been described as a first cousin of clog dancing and an uncle of tap dancing and it was alive and well in Priddy up until the 1950s. 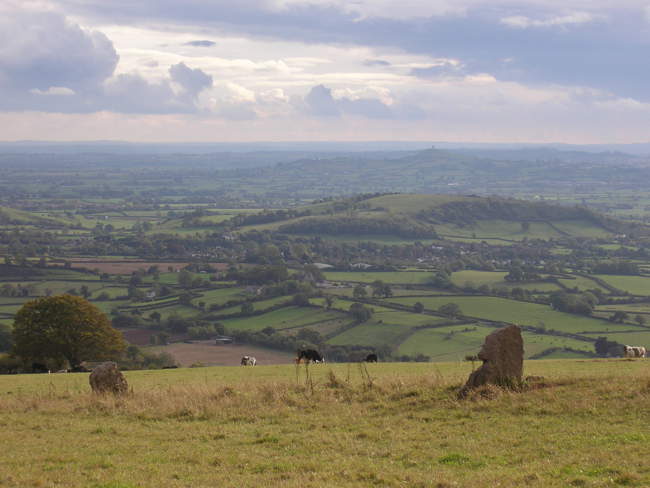 Priddy folk also hold firmly to the belief that Joseph of Arimathea visited the village to trade in metal and on one occasion brought his nephew Jesus of Nazareth; 'as sure as our Lord walked in Priddy' is an old local saying.

This legend is commemorated in the words of William Blake's Hymn 'Jerusalem' in which the Mendips provided the 'mountains green' whilst Priddy, some say, provided the 'dark satanic mills'.

The Romans exported Lead from the village along Pilton Drove (now Pelting Drove) and Axbridge Street.

When travel writer Arthur Mee visited the village in the 1930s he wrote that the fountain in Priddy had never run dry.

It is still in situ, next to Fountain Cottage on the Green but sadly no water is flowing.

Food and Drink in Priddy

For the thirsty traveller, however, help is at hand because Priddy has a variety of splendid hostelries to meet their needs.

On the Green itself is the 15th Century 'New Inn' - a free house catering for drinkers, diners and overnighters.

Round the corner is the Queen Victoria, which is over 300 years old, has three open fires and serves an excellent range of food and drink.

On the outskirts of the village is one of the most legendary public houses in Somerset 'The Hunters Lodge' where a warm welcome awaits - providing you don't ask for a Blue Lagoon with a cocktail umbrella in it whist making a mobile phone call.

The village is also blessed with the Priddy Good Farm shop at Townsend Farm where Trevor and his team provide some of the best cuts of meat, homemade pies and other epicurean delights in the County. Try a 'Priddy Burger' and you will never go near a fast food outlet again!

Finally, as with any village, the future is all about the children and the good news for Priddy is that it is blessed with a first-class village primary school.

Located next to the Church, Priddy Primary School has been educating village children for over 150 years.

Days Out in Priddy

Places to Visit near Priddy