You are here:  Attractions -> Things to Do in Greater London -> St. Paul's Cathedral 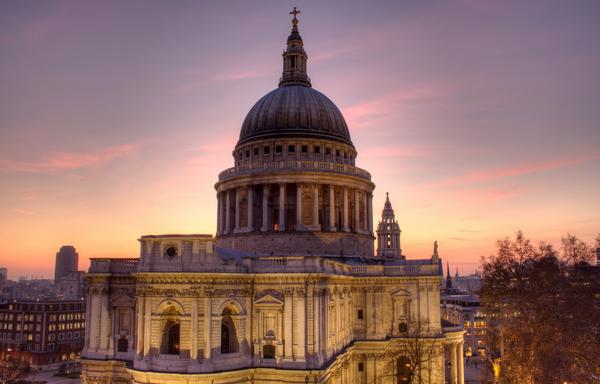 View at Dusk ©Shutterstock / Richard Waters
St Paul's Cathedral is Sir Christopher Wren's masterpiece, built in glowing Portland stone, crowned by the magnificent dome; a famous landmark on the skyline of the City of London.

The wide flight of steps leads to the superb west facade, a double storey portico and the two Baroque towers. The left tower houses the largest bell in England, "Great Paul" cast in 1882 weighing 17 tonnes. 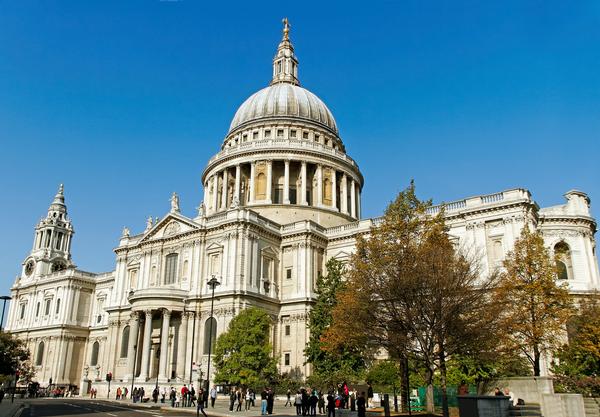 Inspiration to the Nation

St. Paul's was an inspiration to the nation during the Second World War, when much of the surrounding area was destroyed during the Blitz, pictures were shown of St. Paul's standing steadfast, its dome wreathed in smoke and flames. 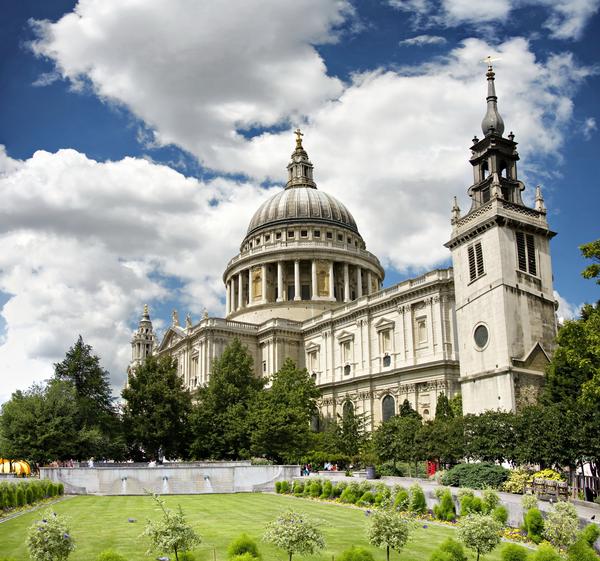 View with Garden ©Shutterstock / Viktor Kovalenko
It was miraculous that St. Paul's survived such an onslaught, although not completely unscathed. 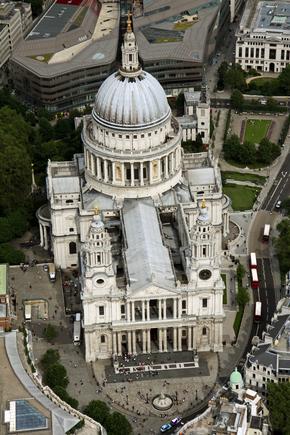 © Shutterstock / Neil Mitchell
A bomb demolished the High Alter, and the Crypt suffered damage as did many of the stained glass windows.

These were later replaced with clear glass, which was Wren's original intention, improving the light within the Cathedral.

Originally the site of a Roman Temple to Diana, the location has had several churches built upon it.

The present Cathedral replaces Old St. Pauls, which was destroyed in the great fire of London in 1666. Sir Christopher Wren was commissioned to design the replacement.

His first two designs were turned down before finally his third design was accepted, and work begun in 1675.

The first service was held in 1697 but it was a further 13 years before work was completed in 1710. St. Paul's may be considered the world's first Protestant Cathedral.

The interior of St. Paul's, like the exterior, is dominated by its great Dome, which crowns the intersection of the cathedral. 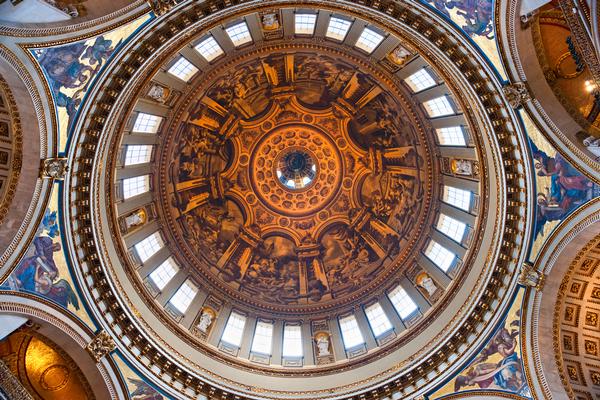 Interior ©Shutterstock / Luciano Mortula
One of the largest Cathedral domes in the world 111.3 meters high, weighing 65,000 tonnes it is supported by eight pillars.

The frescos, which decorate the interior of the dome are by Sir James Thornhill.

Around the Dome there are three Galleries, the most famous is the Whispering Gallery, which runs around the interior, 259 steps from ground level. 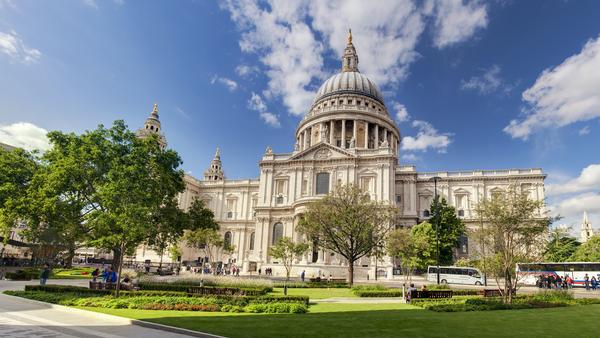 © Shutterstock / Janis Lacis
The acoustics in this part of the Cathedral make words whispered to the wall, audible 100 feet away on the opposite side.

The Stone Gallery, 378 steps from ground level, is on the exterior of the Dome, from where you have a good view of the city and the River Thames.

The most superb views are from the Golden Gallery, 530 steps from ground level, the highest point of the outer Dome. 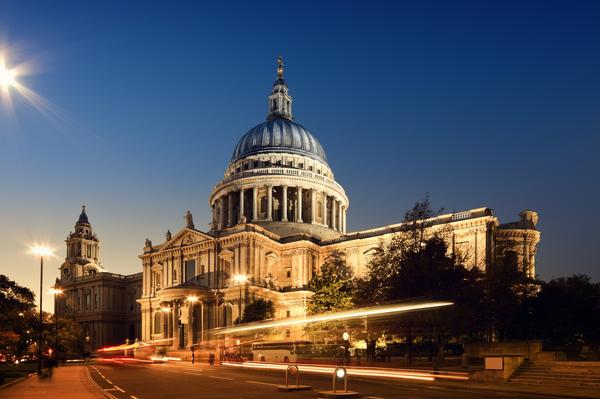 © Shutterstock / r.nagy
In The North Isle is the Chapel of all Souls, dedicated to the memory of Lord Kitchener and servicemen who died in the Great War. 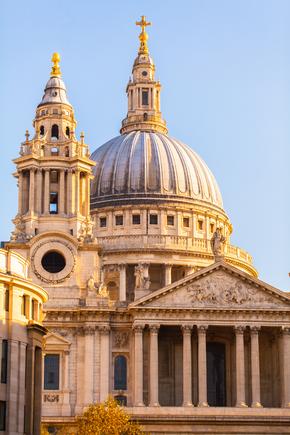 © Shutterstock / Cedric Weber
This isle also contains the magnificent memorial to the Duke of Wellington, hero of the battle of Waterloo.

In The North Transept hangs Holman Hunt's "Light of the World", this is the third version of the painting, painted by Hunt in 1900; the original hangs in Keble College, Oxford.

The South Transept contains Nelson's Monument, the naval hero died in the battle of Trafalgar in 1805.

It shows Nelson leaning on an anchor and features a lion, a symbol that the person commemorated died in battle.

There are also memorials to J.M.W. Turner the artist, and Captain Scott the explorer who died returning from the North Pole in 1912.

The first part of the Cathedral to be completed and consecrated was the Quire, where the choir and clergy sit during services.

Here you can see the Bishops Throne, or cathedra, from which the name Cathedral derives. 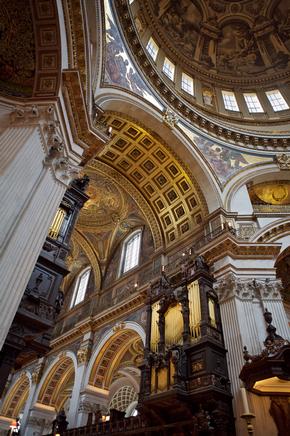 © Shutterstock / Instinia
The magnificent organ case, one of the Cathedral's greatest artefacts, and the delicately carved choir stalls on each side of the chancel are by Grinling Gibbons.

The High Altar we see today is a replacement for the Victorian Altar damaged during the Blitz. It is made of marble and carved gilded oak, with a canopy based on a sketch by Wren.

The Apse is home to the American Memorial Chapel honouring the American Servicemen and women who died in World War II.

The limewood panelling incorporates a rocket as a tribute to America's achievements in space.

The South Quire Isle contains a marble effigy of John Donne who died in 1631, a Dean of old St. Paul's and one of Britain's finest Poets.

This is one of the few effigies to have survived the great fire, and today you can still see scorch marks on the base of the statue.

The Crypt, thought to be the largest in Europe, contains around 200 memorials. Here are the tombs of Nelson, Wellington, and of Sir Alexander Fleming who discovered penicillin.

In Artist's Corner are the graves of Sir Arthur Sullivan the composer, Sir Henry Moore the sculptor, the artists Sir John Everett Millais and Joshua Reynolds.

Surrounded by tombs and memorials to his family, is the simple marble slab marking the resting place of Sir Christopher Wren, above is the inscription chosen by his son "lector, si monumentum requiris, circumspice" (reader, if you seek his monument, look around).

Days Out near St. Paul's Cathedral