You are here:  Attractions -> Things to Do in Surrey -> River Wey and Godalming Navigations and Dapdune Wharf 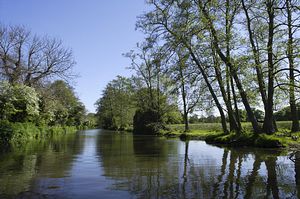 The River Wey was one of the first rivers in Britain to become fully navigable, it opened to commercial river barges in 1653. Today the Wey River, Godalming Navigations and Dapdune Wharf provide almost 20 miles of waterside walking paths and a haven for wildlife, just a short drive from London.

The River Wey, is Surrey's oldest waterway, it runs for 15 and a half miles and links Guildford with Weybridge (to the northeast) and London via the River Thames. The Godalming Navigations were opened in 1764 and allowed barges a further four miles upriver.

Originally the Navigations were used for transporting heavy goods such as coal, wood, timber, corn, flour and even gunpowder in barges 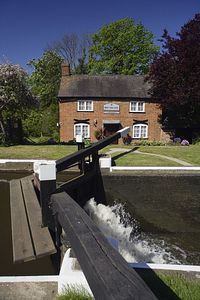 along to the River Thames and onwards to London.

In 1796 the Basingstoke Canal was dug to the west and it joined with the River Wey at Stonebridge. This whole stretch of waterways was so busy and efficient that, unlike most other canals, it survived the arrival of the railway and continued in business until well after World War II.

In 1964 this stretch of the River Wey, Godalming Navigations and Dapdune Wharf were donated by the owner-operators, Stevens and Sons, to the National Trust. It continues to be one of the few National Trust ventures which is profitable and self-supporting. Altogether this National Trust owned waterway has 14 locks and two sets of flood gates along the extent.

Although they no longer have a commercial use, the waterways are a valuable recreational asset for boaters, canoeists, walkers, cyclists, joggers and fishing enthusiasts. It is also a living piece of British industrial archaeology.

Dapdune Wharf was originally where the river barges were built. It has been restored with a stable, 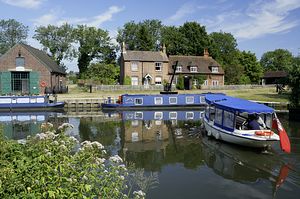 barge-building shed and a blacksmiths. It now houses an award-winning Visitor Centre which tells the whole history of the development of the River Wey, its navigations and the people who lived and worked on the barges. It even has a restored barge, "Reliance" for visitors to climb aboard and explore.

Other highlights of a visit to the River Wey, Godalming Navigations and Dapdune Wharf include a horse-drawn river barge trip on the "Iona" or a ride on an electric launch to see some of the river's wildlife including wild flowers, waterfowl, ducks and butterflies.

It is possible to walk or cycle the whole 15 mile length from Godalming to Weybridge along the popular towpath. Narrowboats are also available for private hire.

There are picnic areas and toilets at Dapdune Wharf and there is a small tea room and ice cream shop for light refreshments.

The National Trust operates a programme of events including guided walks along the towpath and tours of the Dapdune wharf, making it a pleasant family day out at any time of year.

Days Out near River Wey and Godalming Navigations and Dapdune Wharf