You are here:  Attractions -> Things to Do in Gloucestershire -> Newark Park 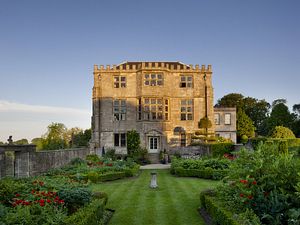 
Built as a hunting lodge around 1550, this tall, symmetrical building with its mullioned windows reflects the sophisticated style of the Elizabethan court rather than that of a local country house.

Newark Park was built as a hunting lodge by courtier Sir Nicholas Poyntz in a wonderful situation in the Cotswolds with fine views down to the River Severn. His family home was Acton Court, about 10 miles away, on the outskirts of Bristol.

Sir Nicholas, as his family before him, was a prominent member of the royal court, becoming Groom of the Bedchamber to Henry VIII. His lodge, not surprisingly, was built on lands confiscated from the Abbey of Kingswood and it was given to him after 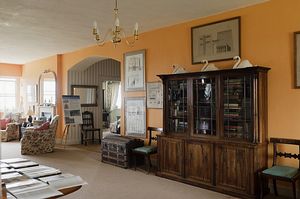 the Dissolution of the Monasteries in 1539.

Some remains of the former abbey and much of the prepared stone was incorporated into the new building. The top two floors of the lodge were designed as Banqueting Halls and bedrooms for guests, from which fine views of the surrounding 700 acre deer park and woodland could be enjoyed. The ground floor had various reception rooms and the kitchens were in the basement.

The house was remodelled by James Wyatt in the 1790s for the Clutterbuck family who converted it from a hunting lodge into a family residence. Fortunately the Tudor fireplaces and the fantastic dragon weathervane with its long coiled tail on the rooftop were kept intact.

The additional block was added to the rear of the property and has more neo-classical interiors. The cantilevered staircase was one of Wyatt's most impressive additions.

The two buildings are joined by a central hall which has a grotesque frieze of sheep's skulls, perhaps intended to refer to the woollen trade which brought prosperity to the area from the Middle 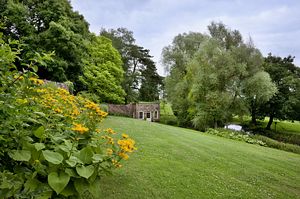 A tour of the interior reveals a mix of furnishings from many periods. Modern art is displayed with period furniture and an eclectic collection of artifacts from around the globe are now on display.

The formal gardens were laid out more recently by Mr Robert Parsons, a tenant at Newark Park from 1970 until 1994. The wild bulb garden and the rock gardens created in the late 19th century still occupy the slopes of the valley below the lodge and offer long walks with breathtaking views of the Mendips.

At the base of the sloping gardens a small summer house with delightful windows looks out across a small lake. It was once buried beneath the tangled overgrowth along with the nearby walled garden which is now being restored.

Guests are invited to stay in part of Newark Hall which has been converted by The National Trust into a self-catering apartment, but be warned. Local legend has it that the spirits of the monks still live here, haunting the stones which were once part of their former Abbey.

Days Out near Newark Park

Places to Visit near Newark Park