You are here:  Towns -> Places to Visit in Gloucestershire -> Westbury-on-Severn

Things to do in Westbury-on-Severn, Gloucestershire 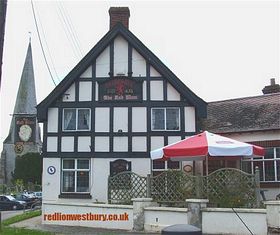 Westbury-on-Severn is an attractive rural village situated, as its name suggests, on the River Severn.

It is noted for its most unusual parish church which has a separate steeple.

This came about as the new brick steeple had just been completed when there was a fire and the wooden church building burnt down.

The new unattached church was built to replace it.

In the porch of the church, visitors can see several markings of crosses which were made during the English Civil War.

The village is well known as it offers several vantage points for watching the Severn Bore when conditions are right.

It is an amazing tidal wave that courses upriver and surfers and canoeists ride on its crest.


Westbury-on-Severn runs along the A48 for just over a mile and is lined with terraced cottages. Along the way, there is a post office and village store, the old police station, a doctor's surgery and the village pub, the Red Lion.

This black-and-white timbered building dates back to 1710 and has a traditional rustic interior, a beer garden and an excellent restaurant that is renowned for its Sunday lunches and an extensive menu of local favourites.

The local housing estate is mostly confined to the south side. The High Street overlooks low lying water meadows which run down to the river.

The parish is a lively community with plenty of social events, sports teams and local groups. In July the village puts on a fun carnival which many visitors attend.

The village has a primary school and a parish hall which is the centre for football, rugby and cricket teams in season, Brownies and the amateur Westbury Players who put on an annual pantomime.

Things to do in Westbury-on-Severn


The main attraction in Westbury-on-Severn is the National Trust owned Westbury Court Garden.

It was laid out in formal Dutch style around 1696 and is a rare survivor of the trend in the 18th century to restyle such formal gardens into informal landscapes which Capability Brown was noted for.

Instead, these historic gardens offer a refreshing change, centred on a long man-made canal that stretches for 137m (449 feet).

At the end of the water, the eye is drawn beyond the wrought iron gate to the countryside beyond. A red brick pavilion and a line of topiary sculptures are reflected in the waters.

A separate intersecting canal is overlooked by a summer house and there is a profusion of colour in a border of cottage garden perennials. There is also a wonderful parterre of geometric shaped beds and topiary.

The Royal Forest of Dean is nearby and offers nature walks and plenty of wildlife.

Garden Cliff is another popular attraction. When the tidal river is low, fossils and sharks' teeth can be found along with coprolites (fossilized dinosaur droppings!).

Other collectable treasures are lumps of pyrite, known as fool's gold, and the amazing devil's toenails which are fossils of the shells of an extinct oyster.

Gwyn Nicholls, a famous Welsh rugby player was born in Westbury-on-Severn in 1874. 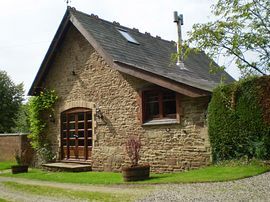 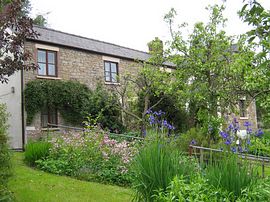 more self catering near Westbury-on-Severn...

Places to Visit near Westbury-on-Severn