You are here:  Attractions -> Things to Do in Gloucestershire -> Dyrham Park 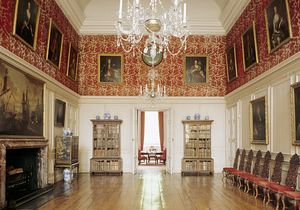 
The impressive baroque mansion of Dyrham Hall was principally developed by William Blathwayt. He married Mary Wynter in 1686 and on the death of her father began work on the neglected Tudor manor house and estate which she had inherited.

Over the next ten years as the Blathwayts poured investment into the house, it was gradually extended and enhanced. A new west wing with glorious views towards Bristol was added, then the east wing and finally the extensive orangery were added.

The house was further enhanced by magnificent formal gardens. The grand façade was created by architect and landscape designer William Talman, Sir Christopher Wren's right-hand man, which shows how far the Blathwayt family had risen in importance. 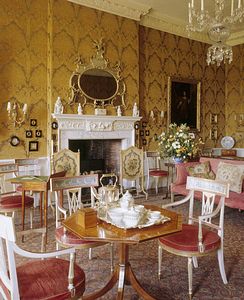 of State under William III and much of the interior décor of Dyrham House and the water gardens had a distinct Dutch influence. The grand entrance hall still has bird paintings by Melchior d'Hondecoeter hanging on embossed leather which were brought over from The Hague for the Blathwayt family.

Visitors can see the beautiful tulip detail on the door hinges and locks in the Balcony Room and there is a fine collection of traditional blue and white Delftware scattered throughout the house.

Art lovers will also appreciate the works of Dutch artists including the perspective painting of a Dutch interior by Hoogstraeten. Eighteenth century antique furnishings on show include furniture by Gillow and Linnell.

Once the initial work was completed, Dyrham Hall received almost no further attention until the mid 19th century.

Unfortunately the family did not have the finances to alter or even maintain the property until Colonel Blathwayt inherited the house in 1844. He took out a crippling loan to make essential repairs and to buy back various family pictures and heirlooms which had somehow left the hall.

One benefit of such little investment has ensured the survival of the domestic quarters just as they were, giving present day visitors a wonderful insight into life "in service".

Some redecorations were carried out by the tenant, Lady Islington, between 1938 and 1946. Unfortunately the upkeep became too much for the family to consider and Dyrham Hall was given to the National Trust in 1954.

Although the grounds no longer have the formal gardens, terraces and water features of the original era, the established beech and cedar groves which cover some 110 hectares (272 acres) make a pleasant place to stroll along the park trails.

The National Trust shop offers a superb selection of interesting items including plant sales and produce made using local venison and perry pears. There is also a tea garden with a snack kiosk. 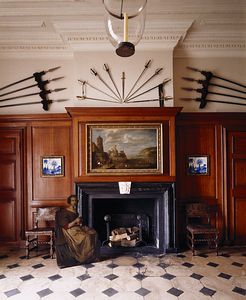 Days Out near Dyrham Park

Places to Visit near Dyrham Park