You are here:  Attractions -> Things to Do in Devon -> Knightshayes Court 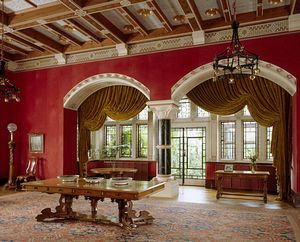 They say that every cloud has a silver lining. In the case of the Heathcote-Amory family, it was the hounding of lace-maker, John Heathcote, out of his Nottingham factory by the Luddites in 1816 which forced his move to Tiverton. His new premises became the largest lace factory in the world and the profits led to the building of the magnificent Knightshayes Court by his grandson, John Heathcote-Amory.

The superb Victorian home was originally designed by William Burges, a well-known church architect, in 1869 and he included the Gothic pediments and gargoyles which can be enjoyed today. He was eventually replaced by John Dibley Crace who completed the interior of the house in less elaborate Romantic style, but 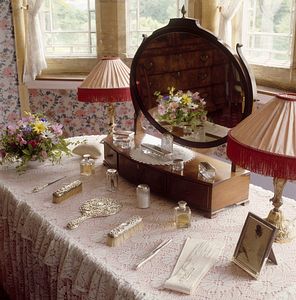 still with a richness of colour which is rarely seen today.

Knighthayes Court was built of dark-red Hensley stone and its mullioned windows and pointed gables make an impressive first impression for the long drive. The house has impressive views of the Devon countryside from its elevated position.

However it was the garden which was the real passion of the Heathcote-Amory family. It was landscaped originally in the 1870s by Edward Kemp, an eminent garden designer, and filled with a collection of rare shrubs and specimen trees which have matured to create this unique landscape.

The family greatly enjoyed their "Garden in the Wood" which included a serene circular waterlily pond and amusing topiary shrubs depicting a local hunt complete with a hound poised to leap the yew hedge.

The sheltered valley garden has been planted with willows and is full of golden daffodils each spring. The exotic trees and autumn crocus provide plenty of stunning autumnal colour, making this a year-round garden of pleasure.

The stunning terraced gardens are filled with perennial colour and local wildlife, and the "Impey Walk" through the woodland and wildflower meadows is most enjoyable in the gentle rolling hillside. 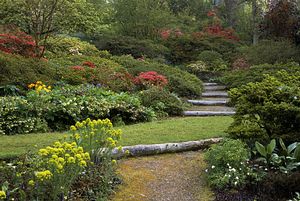 walled garden has recently been restored to its former purpose and now supplies fresh organic fruit and vegetables to the licensed restaurant which is housed in the attractive stable block with its turreted tower.

Some of the highlights in the rich interior include a gold-lettered frieze of Robert Burns' maxims in the dining room. The painted ceiling is supported by beautiful carvings of animals from the Devon countryside such as a badger, a fox and an otter with a fish.

The painted bookcase with panels from Burne-Jones and Rosetti are on loan from the prestigious Ashmolean Museum in Oxford.

The bedroom is similarly stunning with a golden bed and another decorative frieze of birds on branches. The downstairs rooms are lined with paintings from the 3rd baronet's art collection and include works by John Constable and JMW Turner. Every room is filled with antique furnishings making Knightshayes Court somewhere very special to visit.

The Heathcote-Amory family continued to enjoy the house and garden until 1972, but much of their modernizations have gradually been removed and the house has been largely restored back to its original style by The National Trust.

Days Out near Knightshayes Court

Places to Visit near Knightshayes Court