You are here:  Attractions -> Things to Do in Devon -> Cadhay


Cadhay is first mentioned in the reign of Edward I as a Sub Manor to the Manor of Ottery St Mary held by a de Cadehay.

The main part of the present house was built about 1550 by John Haydon who had married the Cadhay heiress. He retained the "Great Hall" of the earlier house, of which the fine timber roof (1420-1470) can be seen. An Elizabethan Long Gallery was added by John's successor, his great nephew, Robert Haydon early in the 17th century, thus forming a unique and lovely courtyard with statues of English Monarchs on each side described by Sir Simon Jenkins as one of the treasures of Devon.

William Peere Williams acquired Cadhay in 1737 and made a number of alterations, providing some fine examples of Georgian architecture.

Cadhay was restored in 1911 by W.C. Dampier Wetham. Wherever possible he restored the work of John or Robert Haydon of the 16th century and 17th century, but where the work of Peere Williams was the dominant factor he restored that instead.

Cadhay stands in a magnificent garden, with herbaceous borders and yew hedges, and looks out over the original medieval fish-ponds, which may well have been used by the Warden and Canons of the lovely Collegiate Church of St Mary of Ottery.

The house is viewed by conducted tours. 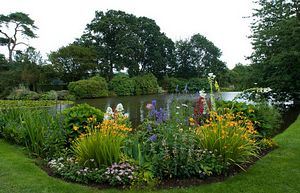 Places to Visit near Cadhay