You are here:  Towns -> Places to Visit in Somerset -> Dulverton

Things to do in Dulverton, Somerset 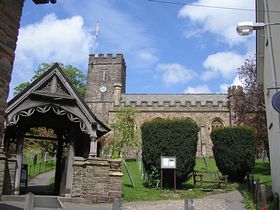 The Rivers Exe and Barle are daughters of the great Moor that represents the last true area of wilderness in Southern England 'Exmoor'. They rush southwards edging ever closer together until, just inside the county of Somerset, they meet.

Stand at the confluence and you will witness something I believe to be unique in the British Isles. A large river, the Barle, meets a smaller river, the Exe and cedes its name to the junior partner. The River Barle never makes it out of Somerset whilst the much-reinforced Exe speeds on its way into Devon and heads for the South coast.

A few miles from this point, up the Barle Valley and over a thousand years ago, a farmstead was built next to a ford, hidden by a bend in the river. In Old English this translated as 'Dieglafordtun', which, by the time of the Domesday Book in 1086 had become 'Dolvertune'. No doubt the Normans relished making this entry as the whole area had previously belonged to Earl Harold who, as King Harold had opposed them at Hastings some years earlier. Today we know this settlement as the town of Dulverton 'Gateway to Exmoor' and one of the most popular tourist destinations in West Somerset.

Mankind has been around the Dulverton area for a very long time. A millennium before the Roman Cohorts arrived on these shores, high up in the wilderness we now know as Exmoor, men were engaged in spanning the River Barle with a bridge that is still in use 3000 years later 'Tarr steps' is one of the 'must see' attractions of the South West. Local legend has it that the old bridge was actually built by the Devil as a bet and with stones weighing in excess of 5 tons it is not difficult to see why such an idea should gain currency.

The Romans came to Dulverton and produced iron from the hard won ore found at nearby Anstey's Combe and, in Medieval times, silver was mined with limited success. The Celts left their mark in the shape of the Caratacus Stone, which stands on Winsford Hill and bears the inscription "Carataci nepus" which is translated as 'a descendant of Caratacus'- a local Celtic Warlord who opposed the Romans. The stone is generally held to be 5th or 6th Century.

Perhaps as a result of its remoteness Dulverton has few connections with events of great historical importance. Both the Civil War and the Pitch Fork Rebellion of the Seventeenth Century came and went without unduly upsetting the local peace. The Jacobite Insurrection of 1745 did, however, result in a number of public executions in the town square.

All Saints Church is to be found at the top end of the town and has a few tales to tell. The tower is a fine Medieval structure but the rest of the church was actually largely rebuilt in Victoria's reign. The Church Clock is some three centuries old: a plaque on the clock frame is dated 28 June 1708 and the clock has to be wound daily! There are also memorials within All Saints to the Sydenham family who lived nearby from 1540 to 1874. Whilst many churches in Somerset have giant Yew trees, Dulverton Parish Church was famous for its enormous sycamore known as 'The Belfry Tree' it dwarfed the Church tower. Visitors to the churchyard today have to content themselves with looking at the stump.

At the bottom end of town is the Medieval five arched Barle Bridge with its pointed cutwater buttresses to assist the river's passage below. Just upstream is Exmoor House, a Grade II Listed Building built as the Dulverton Union Workhouse in 1855. It is now the headquarters of the Exmoor National Park Authority. Close by is a very attractive statue of R.D. Blackmore's heroine Lorna Doone; Dulverton makes a number of appearances in the Exmoor yarn and the novel continues to attract fans of the book (known as 'Doonies' to the area.

Dulverton's status as the Gateway to Exmoor makes the town an ideal base for many visitors intent on enjoying the outdoor pursuits afforded by the local countryside. Ramblers, mountain bikers, bird spotters, canoeists and the hunting, fishing and shooting fraternity all rub shoulders in the town and keep the B&Bs busy.

I personally favour taking a pair of binoculars up onto the moor and watching the herds of red deer going about their business. Also close by Exmoor House is the town's war memorial, which remembers the dead of two world wars as well as the Second World War Destroyer HMS Dulverton. She was protecting the Greek islands of Leros and Kos in November 1943 when she was attacked by German dive-bombers. One of the bombs struck the ship's bridge killing 78 of the 200 men on board.

The town today is busy, bustling and prosperous with a good selection of shops plus places to eat and drink. Most of the buildings date from the 19th Century or are more recent. One claim to fame of the town is that George Williams, founder of the YMCA, was born here, as was the writer Auberon Waugh.

Next to Barle Bridge is the Bridge Inn, which can provide you with a superb pint when you visit the town and a superb web cam view of the River Barle when you visit the web site. Mention must be made of one of Dulverton's great institutions, the award winning Lewis's Tea Rooms which undoubtedly ranks amongst the finest to be found anywhere in Britain. Crisp linen tablecloths, bone-china teacups and a menu designed to banish thoughts of any diet for the day. Cornish and Devon cream teas are always good, but a Somerset cream tea is really rather special!

Further up the town, beyond the ever-welcoming Lion Hotel, you will find one of the best places to dine in the county "Woods Wine Bar and Restaurant". Fine dining, a superb range of wines and real ales at sensible prices in charmingly historic surroundings and very friendly staff. I recommend the venue without any hesitation, but advise you book in advance.

Dulverton boasts some very tasteful gift shops as befits such a tourist destination plus an excellent butcher (try the Exmoor lamb) and superb delicatessen (try the Exmoor Blue cheese). In Fore Street the visitor will also find the Library, located in the old ironmongers shop and opposite is the Town Hall with its distinctive arched stairway entrance. The town gives an overall impression of genteel charm and elegance and the people of Dulverton have many good reasons to be very proud of their Exmoor gem. 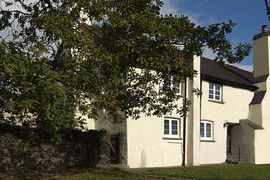 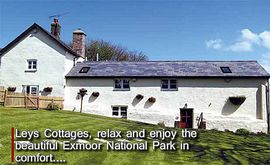 more self catering near Dulverton...

Days Out in Dulverton

Places to Visit near Dulverton