You are here:  Attractions -> Things to Do in Devon -> Tiverton Castle


Few buildings evoke such an immediate feeling of history as Tiverton Castle, originally built in 1106 by Richard de Redvers on orders of Henry I. The de Redvers were the first Earls of Devon and when the line died out in 1293 they were succeeded as Earls by the Courtenays, who rebuilt and enlarged the Castle, and they regarded it as their "head and chief mansion".

In 1495 Princess Katherine Plantagenet married William Courtenay, who became Earl of Devon. She died in 1527 and was buried in St. Peter's Church. Unfortunately for the Courtenays this royal marriage led to their eventual downfall in that turbulent age, and the senior line died out in 1556, and the Castle subsequently had various owners down the ages.

During the English Civil War the Castle was besieged by Fairfax in 1645, and fell to him due to a lucky shot hitting a drawbridge chain. There is a fine collection of Civil War arms and armour, some pieces of which can be tried on.

Nowadays the Castle is a peaceful, private house, and the buildings, furnishings and exhibits reflect the colourful history and development. With continuing conservation in the Castle and beautiful walled gardens there is always something new and interesting to see. 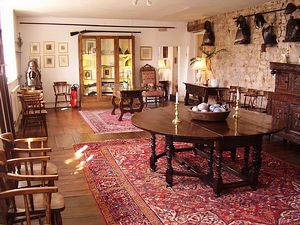 Days Out near Tiverton Castle

Places to Visit near Tiverton Castle