You are here:  Attractions -> Things to Do in West Midlands -> Kinver Edge and Rock Houses 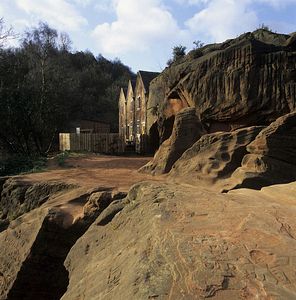 
From the remains of the Iron Age Hill Fort to the restored Holy Austin Rock Houses, people have been living in the area of Kinver Edge for thousands of years.

Kinver Edge was created millions of years ago from wind-blown sand which had collected over time.

The swirling patterns in the sandstone rock can still be seen in the walls and ceilings of the cave dwellings where water and the elements are gradually eroding away the soft sandstone rock.

A visit to these fascinating and unique rock houses shows how they were dug out of the soft sandstone of the Kinver Edge ridge to make cosy but primitive dwellings until the 1950s.

One of the dwellings has been restored to show 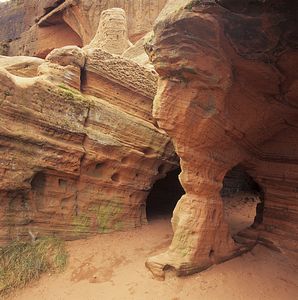 it as it would have been in Victoriantimes, complete with a cooking stove, oil lamps, rag rugs and a basic kitchen.

The communal well is now covered with ivy.

However, there was no sanitation, electricity or running water and the last inhabitants were forced to move to "better" homes in 1967 by a legislative order.

The cliff-face houses generally had a living room and a bedroom with a separate store in the deepest and coolest parts of the caves.

As you can imagine, the dwellings have always been a local attraction.

The troglodyte residents baked cakes on the cooking ranges built into the rock wall and sold them to curious tourists.

Piped gas was provided for cooking and lighting and the pipes still lie under the sandy paths.

The houses had sloped chimney flues to carry out the smoke, which can still be seen like a giant honeycomb in the walls. 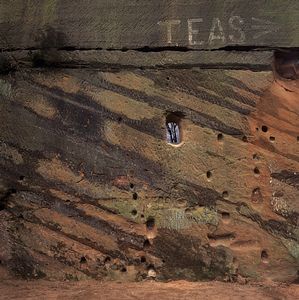 slotted into the openings to protect them from the elements.

Now just the grooves can be seen and the long flight of steps cut into the rocks has long since been destroyed.

Everything had to be carried up the hill, but the advantage of the position was the rewarding views that stretch for miles.

These eleven Staffordshire houses are on three levels, with the upper levels being unrestored.

There is an exhibition on-site with information about the history of these unique homes and some old photographs.

After exploring these unusual historic residences and the exhibition, Kinver Edge is ideal for exploring on foot as it has some of the best views of the Staffordshire countryside from the top of the escarpment.

The local footpath follows part of the Staffordshire Way.

Further geological features in the area include Nanny's Rock, also made of the same stunning red coloured sandstone.

Walks along the forested route will reveal ancient earthworks, criss-crossing footpaths and some perfect spots for enjoying a picnic, with views across the Severn Valley.

Days Out near Kinver Edge and Rock Houses

Places to Visit near Kinver Edge and Rock Houses