You are here:  Towns -> Places to Visit in Essex -> Rettendon

Things to do in Rettendon, Essex 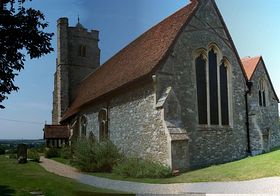 Rettendon is a quite widely spread village and includes the hamlet of Battlesbridge which is on the tidal River Crouch. The parish church is All Saints and sits on the hill just off the main road to Chelmsford.

This church has interesting brass plaques which some like to view and even produce "rubbings". The Church is well preserved and contains a very interesting marble memorial to the Humphrey family which is considered to be specially important as a style of marble statues.

The village is mostly by-passed by a new dual carriageway which has made this a more desirable place to live since it is now a quieter and more secluded place than in the past when main road traffic passed through at maximum speed.

There is a good public house at The Bell, and also at the Barge and the Hawk Inns in Battlesbridge with a good ambience and excellent food.

Battlesbridge is the home of a large and varied antique trade with many different groups operating from many of the premises previously used by, the mill, various farms, cottages and the grocery store.

From the top of Rettendon church tower it is said that you can see at least seven other village church spires.

Rettendon has both Cricket and Football clubs and there is good participation in the village annual Flower Show.

Romans Farm is built on the site of a Roman Villa which has yielded many artefacts and there are also Old Stables now restored into a home which were formerly used by the Bishop of Ely.

There is an ancient house in Workhouse Lane, Rettendon which was recorded in the Domesday Book.

more self catering near Rettendon...

Places to Visit near Rettendon