You are here:  Towns -> Places to Visit in Suffolk -> Peasenhall

Things to do in Peasenhall, Suffolk 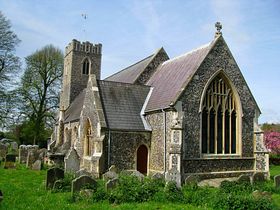 Peasenhall lies along a valley running east to west and Peasenhall's main street (the A1120) runs alongside the ‘Causeway' - a brook, which is now a culvert with bridges across it. On either side are pretty cottages, some in traditional Suffolk pink, some thatched, others slated or roofed with pantiles.

Peasenhall's name is supposedly derived from ‘Pisenhalla' - a valley where peas grow. There has been a settlement here since Roman times and the current population is around 540.

Peasenhall was the scene of a murder mystery in 1902, when a maid named Rose Harsent was brutally killed and a local man, William Gardiner, was tried for the crime. However, the jury could reach only a majority verdict; as a unanimous verdict was needed a second trial took place, but with the same result, so the charge was dropped, the accused man left the village. And the real murderer was never caught..

In the 19th century, Peasenhall was home of Smyth of Peasenhall. From 1800, three generations of Smyth built up a seed drill manufacturing business that operated for over 160 years. The agricultural farm machinery produced at the factory earned worldwide recognition for its innovation, efficiency and durability. Smyth of Peasenhall specialised in seed and manure drills. The seed drill is immortalised forever in the village sign at the junction with the road to Halesworth.

There are some interesting buildings, such as The New Inn which is a medieval hall house. It is cited in leases in the 15th century and was restored by the Landmark Trust in the 1970s. It is now available to rent. Other buildings of interest include the Ancient House, with its early 18th century facade, and the somewhat curious ‘Swiss chalet-style' Village Hall (also known by its original name, the Peasenhall Assembly Rooms), built by James Josiah Smyth, grandson of James Smyth, founder of Smyth of Peasenhall.

Peasenhall and its immediate neighbour, Sibton, are blest with two schools thanks to the Victorians. Peasenhall (Primary) School, had two generations of Smyth on the original board, and opened in 1875. Sibton (Nursery) School, founded in 1719 by members of the Scrivener family - who remain a prominent family in the area - opened in 1840.

St. Michael's church has a dragon and club-wielding ‘wodewose' or Wildman that lie in the spandrels of the main entrance. The church's font, of octagonal design, is believed to be 12th century. The church was almost entirely rebuilt, apart from the 15th century tower, in 1860 by Mr. Brooke, the then squire of nearby Sibton Park.

Today, Peasenhall may no longer have a pub - but the nearest is only a 20 minute walk away, to The White Horse in Sibton - but it has an excellent Tea Rooms, and other fine shops such as a butcher, delicatessen/grocer, village stores/Post Office, ‘junk shop', furnishings shop - and even an art gallery! Villagers are fortunate, too, in having a service garage and heating engineering company to hand. 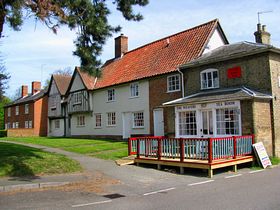 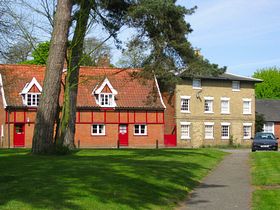 On the Village Green © Peggy Cannell 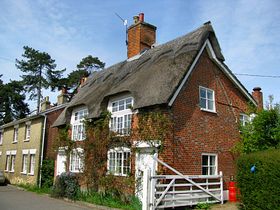 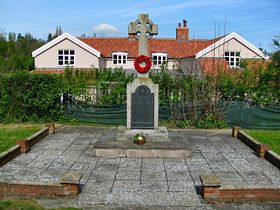 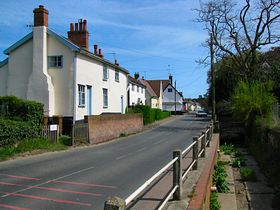 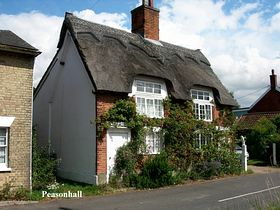 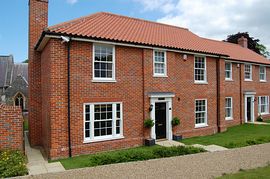 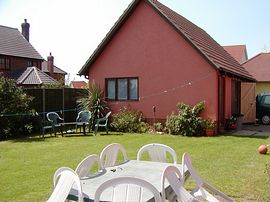 more self catering near Peasenhall...

Places to Visit near Peasenhall