You are here:  Towns -> Places to Visit in Kent -> Gillingham

Things to do in Gillingham, Kent

Gillingham is in Kent.35 miles southeast of London. It was first referred to in the 10th century as Gyllingeham and is occasionally recorded as JillyinghamWater, which indicates how the name should be pronounced. It was probably named after the warlord Gyllingas.

After the Norman Conquest, Bishop Odo of Bayeux built the parish church and an Archbishop's Palace near what is now Grange Road. The village grew up around the church and was surrounded by Brittain Farm.

The town is on the main A2 which runs from Dover to Brompton in London and it is also on Watling Street which linked Chatham with Dover. Nearby communities formed along the routes and eventually they all merged to become Gillingham.

Gillingham was a limb of the Cinque Ports and was of great importance as the Chatham Dockyard was within its boundaries. It was started by Elizabeth I and finally closed in 1984 causing massive local unemployment.

During the Seven Years War from 1756 the Chatham Lines of Defence were built with several batteries and redoubts. Fort Amherst and Fort Pitt were important defences at that time.

The railway arrived in 1858 to serve the dockyard labourers and a branch line ran right into the dockyard.

The oldest building in Gillingham is the Parish Church of St Mary Magdalene which dates back to the 12th century. It is known locally as "The Church on the Green". The town also has a mosque and a Hindu Sabha Mandir.

Gillingham is a sizeable town of around 100,000 residents, having been given municipal borough status in 1903. It became part of the Medway unitary authority in 1998.

It has a busy retail centre which serves the whole of the Medway area. Every week it has a large street market which sprawls along the High Street on Saturdays and Mondays.

Gillingham Business Park was established on the outskirts of the town, linked by the Medway tunnel to the M2 motorway.

Gillingham has excellent sports facilities. Medway Park Leisure Centre has three swimming pools, a gym, sports halls and squash courts. The outdoor sports centre at the Strand provides for sailing and motor boats and there is an outdoor swimming pool and a narrow gauge railway. There is also a large marina.

Things to do in Gillingham

The Royal Engineers Museum is the most important collection of records and information about military engineering history. Outside there is a collection of tank-mounted bridges. Chatham Historic Dockyard is also well worth a visit.

For a day on the water, take a trip on the Kingswear Castle Paddle Steamer.

The National Trust has several interesting properties in the area including Owletts, Stoneacre and the Old Soar Manor. On a grander scale, Ightham Mote, the stately home of Knole Park and Rainham Hall all show the prosperity and wealth of the area.

Rochester Castle is just a couple of miles from Gillingham and Tilbury Fort is about nine miles away. 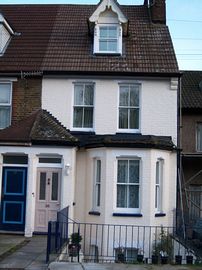 more self catering near Gillingham...

Days Out in Gillingham

Places to Visit near Gillingham