You are here:  Towns -> Places to Visit in Buckinghamshire -> Cold Brayfield

Things to do in Cold Brayfield, Buckinghamshire 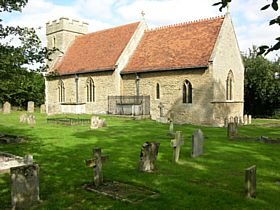 Cold Brayfield, in the ancient hundred of Bunsty, lies alongside the main road from Bedford to Northampton.

Its setting is flattish arable land in a loop of the Great Ouse.

The village consists of a few houses and farm buildings on either side of the busy main road, with a lane to the church, Brayfield House and a few modern cottages running off to the South. It is numbered among the so-called 'villages of Milton Keynes'.

The church is constructed from limestone rubble and comprises an unaisled nave with a north porch, a chancel and a west tower.

The oldest features are the 12thc North doorway (much altered in the 13th century); a plain window above it, offset to the west; and the 12th century chancel arch jambs.

The arch itself is neo-Norman but is not the only feature inspired by earlier culture - Romanesque sculpture is also to be found around the church.

After the extensive alterations of the 13th Century, the next most significant was the extension of the chancel which took place in the 19th Century.

more self catering near Cold Brayfield...

Days Out in Cold Brayfield

Places to Visit near Cold Brayfield