You are here:  Towns -> Places to Visit in Buckinghamshire -> Olney

Things to do in Olney, Buckinghamshire 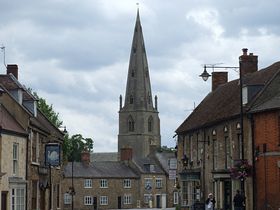 Olney is a traditional market town on the Bedfordshire Buckinghamshire borders, just a short drive from Milton Keynes.

Olney is famous for the annual Pancake race, which was first run back in 1445. In the 18th century Olney was the home of William Cowper and John Newton who wrote the Olney Hymns, which include "Amazing Grace". The Cowper Newton Museum in the market square celebrates their lives and times.

Olney was once a centre of lace making. It was the Flemish Protestants who brought lace making to England during the 1560s. Many of the immigrants were lace makers, who moved out of the overcrowded ports and began to settle into areas now regarded as the historic centres for the craft of lace making - this included Olney, Newport Pagnell and Buckingham.

One of Olney's features is its High Street, which is one of the widest High Streets in England. Quite refreshingly these days, Olney has a large number of independent shops unlike many similar sized towns, there are no large retail outlets dominating the town. From traditional tearooms, specialist furniture shops, art and crafts shops, ironmongers and butchers there are shops to suit everyone's needs.

Each Thursday is market day, which is held in the market square in the centre of the town. There's also a farmers' market on the first Sunday of each month, which is a great opportunity to purchase local produce.

Close to Olney there is Emberton Park and Clifton Meadows, where activities such as canoeing, fishing or simple riverside and lakeside walks are available.

One of Olney's most popular events is ‘Dickens of a Christmas.' The whole town takes part in a Victorian themed day with live entertainment and other festive events.

You can be sure of a busy and interesting day when you visit Olney.

more self catering near Olney...

Days Out in Olney

Places to Visit near Olney