You are here:  Attractions -> Things to Do in Bedfordshire -> Woburn Abbey

Experience living history at Woburn Abbey, home to the Dukes of Bedford for over 300 years and still home to the 15th Duke and his family today.

In 1538 the Abbot, Robert Hobbes, was found guilty of treason and the monastery confiscated. Legend states that he was hanged from an oak tree at the Abbey's gate.

Edward VI granted Woburn Abbey to Sir John Russell in 1547, though it did not become a family home until 1619.

In 1747, the Fourth Duke commissioned Henry Flitcroft to rebuild the west range, including the grand series of staterooms. In 1802, Humphry Repton landscaped the park as it appears today.

Successive Earls and Dukes of Bedford have, with their love of art, created one of the finest private collections in England. Van Dyck, Gainsborough, Reynolds and Velasquez are just some of the great artists represented here.

There are over 250 paintings to enjoy on the three floor tour of the House. In the Private Apartments, the Venetian Room is one of the most beautiful dining rooms in the world with 21 pictures of Venice by Canaletto.

The paintings were commissioned by the 4th Duke while on The Grand Tour in 1731. The visitor will also see beautiful French and English furniture, a famous collection of Sèvres porcelain, gold and silver.

There are three different ways to enjoy your tour of Woburn Abbey: visitors may follow the route around the House in their own time, asking questions of the Room Wardens, and referring to the legends in the rooms or the guidebook; there is also an audio tour, with a room by room narration or an escort warden on duty, (if available), will be delighted to take visitors around the House, free of charge.

The Deer Park and Grounds 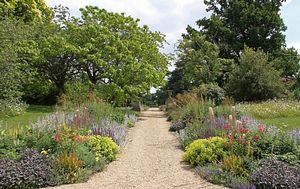 landscaped by Humphry Repton in the late 18th century. Nine species of deer roam here, including the Milu or Père David deer, who were saved from extinction here at Woburn.

As you enter the Park you will pass the splendid range of farm buildings, designed by Robert Salmon and Henry Holland, built in 1780. These incorporate the Bedford Estates Office and the Bloomsbury Stud.

The famous purple and white colours of the Bloomsbury Stud have been carried with great success on race courses around the world. To the left you will see the Dairy completed in 1900.

The Antiques Centre is situated in the South Stable block on two floors. It consists of 51 shops and showcases, some with original shop fronts rescued from towns all over England.

The Antiques Centre is open daily throughout the year , except during Christmas.

The potter can be seen at work in his Pottery and you can buy some of his original designs.

The Gift Shops have an interesting selection of gifts and souvenirs. Estate Venison is available from the Gift Shop from March to September and from the Bedford Estate Office the rest of the year.

The Sculpture Gallery is located in the South Court and is a beautiful setting for exhibitions, seminars, product launches, dinners and weddings. The Gallery holds a Civil Licence.

Days Out near Woburn Abbey

Places to Visit near Woburn Abbey