You are here:  Towns -> Places to Visit in Bedfordshire -> Ampthill

Things to do in Ampthill, Bedfordshire 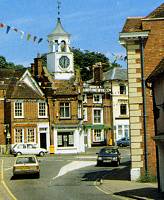 The ancient market town of Ampthill is situated under the brow of the Greensand Ridge.

It is a town that enjoys the rural surrounds of open and wooded countryside, interspersed by small attractive villages.

There is no clear evidence about the town's origin but it is thought it was once a Roman settlement.

The first documentary evidence of a settlement on the site of the town is in the Doomsday Book.

The town is associated with Henry VIII who often visited Ampthill for deer hunting and archery contests.

He chose to stay at the 15th-century castle that once stood within Ampthill Park.

During his reign, Henry brought most of his wives to the castle, including Katherine of Aragon who was confined to the castle for three years during her divorce proceedings.

The castle no longer stands, falling to ruins during the reign of Elizabeth 1st; its site is marked by a

The town is mainly Georgian boasting over 200 listed buildings.

The four main streets lined with elegant houses and other buildings meet at the Market Square.

The Square is dominated by the clock tower; its turret was part of the old Moot Hall (1852) that once occupied the site.

An obelisk pump also occupies part of the Square.

It was a gift to the town in 1785 by Lord Ossory and was a major source of water for the townsfolk for almost two centuries.

Ampthill Church is dedicated to St. Andrew and dates from the 14th-century.

It is built of ironstone in Perpendicular style. Inside is a monument dedicated to Richard Nicolls, a local man who became the first governor of Long Island.

Nicolls was killed in a naval battle and the cannonball that killed him is incorporated in the memorial plaque.

more self catering near Ampthill...

Days Out in Ampthill

Places to Visit near Ampthill