You are here:  Towns -> Places to Visit in Hampshire -> Brockenhurst

Things to do in Brockenhurst, Hampshire 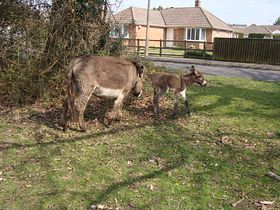 The small town of Brockenhurst is four miles south of Lyndhurst in the centre of the New Forest, Hampshire.

The earliest residents to Brockenhurst can be traced back over 4,000 years to the Bronze Age and there are many tumuli burial mounds in the area.

Brockenhurst was recorded in the Domesday Book in 1086 as being a small Saxon manor called Broceste, pronounced "Brockerste". William Rufus, third son of William the Conqueror and his eventual successor, visited Brockenhurst and worshipped in St Nicholas Church.

After 1348 all mention of the village ends for a while, possibly due to the inhabitants being wiped out by the Black Death, which killed almost a third of England's population.

During the 18th century Brockenhurst was again a flourishing community with many inns serving the mail coaches which ran along the turnpike road from Lyndhurst to the north. In 1745, a wealthy local businessman, Henry Thurston, left a legacy to build the first school in the village.

The railway brought many more visitors to the area in the 19th century. In World War II the Balmer Lawn Hotel was used as a meeting place for General Eisenhower and General Montgomery to plan the D-Day landings and the forest provided excellent shelter for jeeps and tanks.

Surrounded by ancient forest and woodland, Brockenhurst attracts many visitors. It is one of the largest villages in the New Forest with around 3,500 residents.

On the outskirts of the village is Brockenhurst College, one of the top 10 colleges in the country for AS/A level courses, Higher National Diplomas and Foundation Degrees.

Many new homes were built during the 1970s to accommodate Londoners moving out to the green suburban area. It is an ideal commuter area with high-speed trains from the local station to London Waterloo, Southampton, Manchester and Birmingham.

With high house prices, village life has changed in recent times and although Brockenhurst is still very quaint, it has become more urbanized.

Things to do in Brockenhurst

The 150 square miles of ancient woodland in the New Forest was traditionally a royal hunting ground. It is now a delightful area for walking, horse riding and nature spotting. There are many New Forest ponies and deer which roam wild in the forest.

In spring the Rhinefield Ornamental Drive in the forest is gorgeous when the rhododendrons are in bloom. The New Forest Show is held in New Park and is an agricultural event in July which lasts three days.

The branch line to Lymington is now run as a Heritage Railway and the "Lymington Flyer" connects with ferries to the Isle of Wight.

Beaulieu is home to a fine collection of 250 vintage and veteran cars at the National Motor Museum nearby. Palace House is the grand seat of the Montague family on the Beaulieu Estate and it has many rich furnishings and treasures. The abbey ruins house an exhibition of monastic life.

Days Out in Brockenhurst

Places to Visit near Brockenhurst