You are here:  Towns -> Places to Visit in Staffordshire -> Abbots Bromley

Abbot's Bromley, an attractive village south of Uttoxeter has an ancient church, and several typical, Staffordshire half timbered cottages.

It is famous for the Abbot's Bromley Horn Dance, a tradition going back to medieval times, performed annually in September. Twelve dancers and musicians, in Tudor costume perform the dance. Six men balance ancient reindeer antlers on their shoulders; a seventh rides a hobby-horse; and with them are a boy with a bow and arrow, a 'jester'; and a young girl. The dancers advance and retreat in stately fashion; an accordionist and a triangle player accompany the dance. 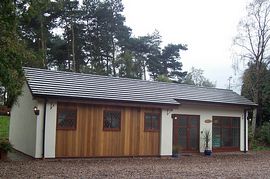 more self catering near Abbots Bromley...

Days Out in Abbots Bromley

Places to Visit near Abbots Bromley