You are here:  Attractions -> Things to Do in Staffordshire -> The Ancient High House

Stafford's Ancient High House has been one of the most important buildings of the town for over four hundred years. Its late Elizabethan architecture makes it particularly distinctive among its 20th century neighbours. Rooms are displayed in period settings illustrating the varied history of the house. The Dorrington family had the house built in 1595 of oak believed to have come from Doxey Woods. It had an important role when King Charles I and his nephew Prince Rupert stayed here in 1642 at the start of the Civil War. The following year, when Stafford was taken over by the Parliamentarians, it became a prison for Royalist Officers.

expect for a house with such a long history, ownership has changed many times with some the region's most important families living here. The Sneyd family were here through the 17th century and in the next century, Mr. Brooke Crutchley owned the house and divided it, the other half being lived in by Samuel Twigg, a mercer. Alterations to the ground floor in the 19th century seriously weakened the structure. Continued deterioration this century resulted in Stafford Borough Council carrying out an extensive programme of restoration. At the rear of the building is a small demonstration herb garden. The Ancient High House promises you an enjoyable and interesting visit.

The Staffordshire Yeomanry Museum, housed within the Ancient High House since 1993, gives visitors a flavour of the history of the Queens Own Royal Regiment. The display covers over 200 years of tradition and is specifically designed to be interesting to members of the general public as well as military enthusiasts. The centre piece of the exhibition

is the Guidon (Standard) of the Yeomanry. It is surrounded by maps detailing the 19 battle honours the Guidon carries. The museum is a fine record of a fine regiment.

Featured in the Ancient High House are samples of 18th century and 19th century wallpapers restored as part of the work carried out on the house by Stafford Borough Council. Designs bear intriguing clues to their history, such as excise duty stamps from 1740s.

The visit of King Charles I and Prince Rupert is commemorated in the civil war room. The coat-of-arms of the Sneyd family, can be seen in this room as a magnificent stained glass window, purchased by the Friends of the Ancient High House.

The furnishings in the Victorian room show some of the splendour of the time. The room is used for Victorian evenings when the piano provides entertainment of the era.

Access to the Ancient High House is difficult for disabled visitors and severely limited for wheelchair users. Our guides will help wherever possible. 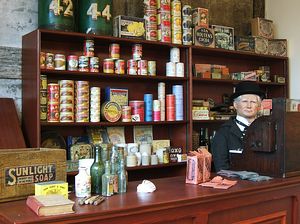 Days Out near The Ancient High House

Places to Visit near The Ancient High House