You are here:  Counties -> Things to do in East Yorkshire 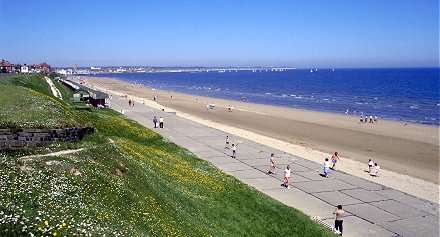 East Yorkshire, otherwise known as the East Riding of Yorkshire, includes the northern part of what was Humberside and the city of Kingston upon Hull - Britain's third largest port.

Hull is situated on the north bank of the River Humber, which is a natural boundary to East Yorkshire. Visit Hull and East Riding Museum, located in the town's Museum quarter, to learn more about the history of Hull and the surrounding area. The Tourist Information Office is in Paragon Street, Hull.

East Yorkshire Tourist Information can be also be found at the North Bank Viewing Area, Hessle.

This is on the outskirts of Hull where the spectacular Humber Bridge crosses the River Humber.

The Humber Bridge was completed in 1981.

It's the longest single span suspension bridge in the world with a main span length of 4, 624 feet.

It truly is a magnificent feat of engineering.

East Yorkshire's Heritage Coast stretches from Spurn Head in the south, to Flamborough Head in the north, in the district of Withernsea. Spurn Head is a National Nature Reserve. It's a narrow projection of sand and shingle, constantly changing with the tides and a stop over for thousands of migrating birds.
To the north is the holiday resort Withernsea. It has a beach which is ideally suited to family fun and is arguably best known for its lighthouse - now a museum - which towers 127 feet above the town.

Hornsea is another popular East Yorkshire holiday town, with a fine beach, attractive gardens and a promenade. The historic town centre encompasses the original village and boasts narrow lanes and houses dating back to the 15th century. Hornsea Museum - housed in an 18th century farmhouse - tells the story of North Holderness Village Life. Hornsea Mere, the largest freshwater lake in Yorkshire is nearby and is less than a mile from the sea. It was formed by the melting glaciers in the ice age and is the last such lake remaining in Holderness. There are also boating facilities and a wildfowl reserve.

Bridlington offers two lovely sandy beaches, one on either side of the historic harbour. The harbour itself boasts a small maritime museum in addition to the usual seaside attractions. The priory church dominates the old town. It's about a mile inland and dates back to the reign of Henry I. North east of the town is Sewerby Hall. It's home to the Museum of East Yorkshire. It's a great place for a family outing, with fine period rooms, a children's playground and gardens containing some of the oldest monkey puzzle trees in Britain.

To the north is Flamborough Head, with towering chalk cliffs and home to one of the largest sites of nesting sea birds in England. Take a walk along the cliffs to see a wide variety of birds including a colony of gannets. There are sea caves and coves to explore all along the coastline.

Inland, Tourist Information can be found in Beverley, a lovely medieval town with narrow streets and market squares. It's still seen as the flourishing market centre for the area. At the north end of the main street is the 14th century St. Mary's church while the 13th century, twin-towered Beverley Minster lies at the south end. Both are famous for their excellent architecture and contain fine carvings, paintings and glass. Beverley became a prosperous town in the Georgian period and many Georgian buildings remain. One of these is Beverley Guildhall. The interior is well worth seeing, but the Guildhall is only open to the public on Fridays. Beverley has a reputation for musical excellence, and hosts three annual festivals: early music, chamber music and folk music.

East Yorkshire is home to the lovely Yorkshire Wolds, with miles of pasture land, undulating hillsides and unspoiled villages. This in addition to Roman remains and standing stones. Walkers can tackle the 79-mile Yorkshire Wolds National Trail from the banks of the Humber estuary through valleys and wooded slopes, before climbing gently to give take in uninterrupted views. The trail descends from the northern escarpment and finishes on Filey Brigg headland. There are many delightful towns and villages along the way to break the journey. These include Driffield, 'Capital of the Wolds', a pleasant town with weekly markets held on Thursdays and Saturdays.

Days out in East Yorkshire


Places to Visit in East Yorkshire