You are here:  Attractions -> Things to Do in North Yorkshire -> Treasurer's House 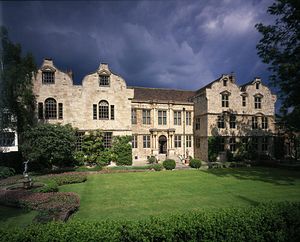 The Roman city of York has plenty of attractions, not least of which is the wonderful Treasurer's House which is situated in the heart of the city, in York Minster yard.

The Treasurer's House merits a visit for several reasons: it was the first house ever given to The National Trust complete with a collection; it has a history spanning more than 2,000 years; it has a fabulous personal collection displayed throughout the thirteen period rooms, and it has several friendly ghosts too!

The elegant Grade I listed townhouse was the grand home of many of the Treasurers of the nearby York Cathedral from 1100 until the Reformation of the Church by Henry VIII. Although much 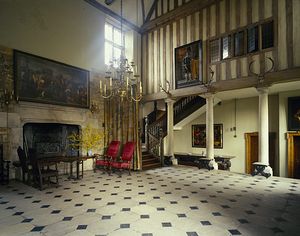 of the house including the elegant Dutch gabled facade was built around 1620 by Sir George Young, the foundation of the building is much older. There is a Roman column and the remains of a Roman Road, the Via Decumana, running through the cellar.

The fine townhouse was at one time divided into three separate residences but its salvation came when wealthy industrialist, Frank Green, acquired it in 1897 and began to restore it, creating the huge hall with its half-timbered gallery in the two-storey entrance hall.

He created a series of period rooms to showcase his enviable collection of antiques including the fine oak refectory table, circa 1600, the marquetry grandfather clock dated 1680 and three pairs of giltwood mirrors in the exquisite drawing room. The thirteen rooms are dedicated to different periods of English history which together span four centuries.

The bedrooms were recreated in early 18th century style and met with the approval of the Prince of Wales, later Edward VII, who stayed there with his wife and daughter Victoria in 1900.

Like any fine museum, the Treasurer's House has a wonderful collection of 16th century art works and portraits complemented by collections of porcelain, china, clocks and fine glass. 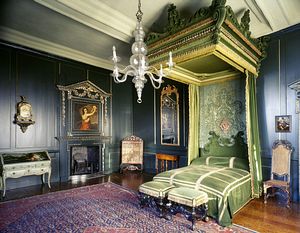 Frank Green was said to be so meticulous that the stud marks still marking the floor were where he stipulated each piece of furniture should stand.

Visitors to the house can take the attic tour and learn about the lives of servants in the Edwardian era, or join the guided cellar tour and learn more about the house's connections with Roman York. The ghosts that are said to inhabit the house include Roman soldiers, a dog, a cat, a grey lady, George Aislabie (a 17th century owner) and Frank Green himself, who threatened to haunt the house if any of his furniture was ever moved!

The Treasurer's House was given to The National Trust, along with its contents, by Frank Green in 1930, along with another seven properties he owned in the city.

To finish off any visit to this wonderful example of English heritage, history and architecture, the secluded walled gardens of the Treasurer's House offer pleasant terrace walks, statuary and a formal sunken garden which stands in the shadow of the impressive York Minster.

The basement tearoom has been awarded many food and tourism awards for its high quality service and authentic recipes which reflect the history of the Treasurer's House.

Days Out near Treasurer's House

Places to Visit near Treasurer's House