You are here:  Attractions -> Things to Do in Kent -> Sissinghurst Castle Garden 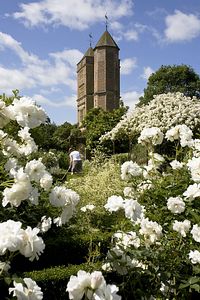 Sissinghurst Gardens in Kent was the creation of author Vita Sackville-West and her husband, Harold Nicolson, MP, in the 1930's. Vita inherited Sissinghurst Castle in the 1930s after living for some time in Constantinople. Together the couple created the gardens in the neglected grounds of the surviving parts of an Elizabethan manor.

During the Middle ages the site was occupied by a Manor House surrounded by a moat. The Moat Walk lawns and the remaining parts of the water-filled moat still mark the location of these historic defences.

During the 15th century, the original manor was replaced by a larger house, built by the Baker family, Vita's ancestors. It was used between 1756 and 1763 as a prison camp for French 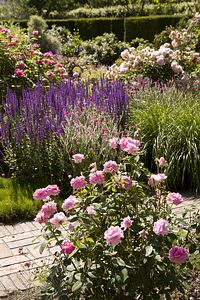 prisoners and after that most of the house was only fit for demolition.

The remaining buildings still left in the gardens are the Priest's House and the Tower, an impressive arched gatehouse. The South Cottage was once used by Harold as a workroom.

As the garden began to take shape, Vita and Harold opened it to the public, charging a shilling for entrance. They nicknamed the visitors "shillingses", although not derogatorily, as they were warmly welcomed.

The garden has various individual gardens which are like separate rooms in a house. Hedges separate them from each other, acting as walls so that each space is quiet and private. Visitors can wander along charming brick-paved paths discovering new vistas at every turn.

These incredibly popular gardens often have a queue waiting to enter, but once inside they are serene and calming. The canopied White Garden is an effective mix of plantings using only white flowers and greenery.

In contrast, the Cottage Garden is a riot of red, orange and yellow, with four Irish 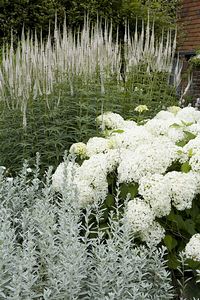 yew trees standing like sentinels in the midst, as they have since 1934. These gardens are at their best in mid-summer.

The area beyond the Yew Walk is the beautiful Orchard, which is a mass of blossom in the spring and has a carpet of wild flowers in the summer.

The Nuttery is full of white bluebells from April onwards. It links the Lime Walk with the Herb Garden. The Lime Walk, apparently Harold's favourite spot, is lined with lime trees and the spring bulbs beneath are a picture to see. Along the Front Courtyard beautiful roses climb the old inner courtyard walls of the red brick house.

The best place to enjoy a full overview of the gardens is from the top of the Tower, a strange folly-like structure.

All would-be amateur gardens will draw inspiration from these compact yet delightful garden "rooms". A day at Sissinghurst can be perfectly brought to a close with a meal in the licensed restaurant, supplied with fresh vegetables from the working kitchen garden.

Days Out near Sissinghurst Castle Garden