You are here:  Attractions -> Things to Do in Kent -> Smallhythe Place 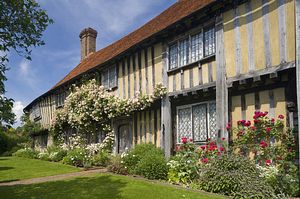 Smallhythe Place is the perfect place for theatre lovers who will be both surprised and charmed by the contents of this 16th century farmhouse in its quiet rural setting.

It was the home of legendary actress Dame Ellen Terry from 1899 until her death in 1928 and it is now crammed with an amazing collection of personal treasures, costumes and memorabilia from her long association with such friends as Oscar Wilde and Alexandre Dumas.

Henry Irving, manager of the Lyceum Theatre and Ellen's professional partner in the theatrical world for 24 years, was with her when she first set eyes on the charming Elizabethan building known as Smallhythe Place. The timber-framed exterior is as full of character as the 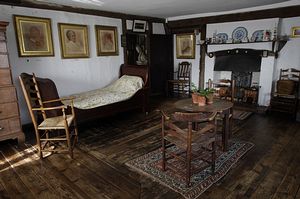 Ellen Terry was one of the most famous actresses of her time and clearly inspired audiences. She travelled widely, using Smallhythe Place as her peaceful refuge.

The rambling farmhouse was surrounded by the Kentish marshes which long-since retreated some 16 miles to the coast. The house was once the Harbour Master's Quarters when it was a thriving shipyard with busy wharves which lined the creek.

Step inside this nursery-tale building and take in the historic ambience, period furnishings and detailed collection of this theatrical museum. Letters, newspaper cuttings and posters cover her successful theatrical career in both Shakespearean and melodramatic roles.

The walls are decorated with photographs and tributes to David Garrick and Sarah Siddons. A letter from Oscar Wilde clearly accompanied his gift to Ellen of his first play.

A personal message from Sarah Bernhardt, signed with a flourish, is on the cover of a dressing table; a monocle belonging to Sir Arthur Sullivan which he autographed across the glass and a visiting card from Andre Dumas all conjure up the social life which Ellen Terry enjoyed at this homely farmhouse.

Peer into the makeup box which once painted the face of this successful "Queen of the Theatre".

The bedrooms are simply furnished with 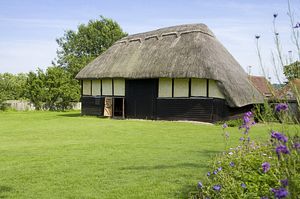 patterned rugs on the bare floorboards, a simple crucifix and a well-thumbed copy of the Globe Shakespeare next to her bed.

In contrast, the rooms display some of the lavish costumes created for her by Edward Burne-Jones for her role as Guinevere in King Arthur. Most famous of all is the beetle-shell gown she wore as Lady Macbeth in 1888. Made of green silk and stitched with thousands of shimmering beetle wings, the costume was worn by her for her full-length portrait by artist John Singer Sargent and the dress can be seen in all its glory at Smallhythe Place.

Family portraits of Terry's mother and her two children, Edith and Edward hang above the bed. Their father, Edward Godwin, was a theatrical designer who Ellen had a liaison with. Edith eventually inherited the house and its contents and perfectly preserved them until donating them to The National Trust in 1939 as a memorial to her mother.

After viewing the wonderful personal collection of Ellen Terry's life, visitors can take a stroll outside in the cottage grounds which include a rose garden, an orchard and a nuttery. The thatched Barn Theatre is now used as a wonderful venue for a local programme of open-air plays and theatrical productions.

Days Out near Smallhythe Place

Places to Visit near Smallhythe Place