You are here:  Attractions -> Things to Do in Kent -> Scotney Castle 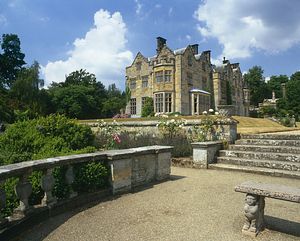 A visit to Scotney Castle is a great 2-for-1 deal. Start with the 19th century "new" neo-Tudor style house which was built for Edward Hussey in 1837. Finish your visit at the ruins of the original medieval castle, complete with glorious gardens and a historic moat, all surrounded by the Kent countryside.

This serene location offers pleasure to those interested in castle ruins, wonderful parkland, dinosaur remains, ghost stories and some of England's most colourful spring gardens.

The delightful architecture of "old" Scotney Castle with its round Ashburnham Tower on the corner of the romantic ruin is further enhanced by the still waters of the reflective moat. Built on the banks of the River Bewel, this historic gem is more 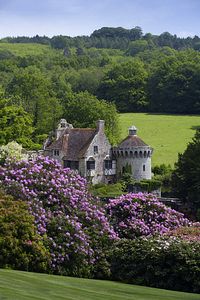 The castle was built during the Hundred Years War between England and France when wealthy families felt the need to protect their family. Look for the projecting rooftop parapet on the tower and the ruined gatehouse, which are all that remains of the house Roger Ashburnham constructed here in 1378. The jagged walls and gaping windows were part of the 17th century additions.

From the 15th century the castle was owned by the Darrell family until the mid 1700s. Local stories and legends abound during this period of the castle's history. Visitors can see the priest's hole used for hiding the vessels of Mass, and on occasions the priest too, during times of religious persecution. Jesuit Father Blount was hidden in the priest's hole during the 17th century and his hidey hole is revealed to curious visitors today.

The estate was then sold to the Hussey family and eventually Edward Hussey (grandson of the original owner) commissioned the new Scotney Castle further up the hillside, overlooking the original building.

The beautiful sandstone used in the construction was actually quarried from the estate, thereby creating the sheltered Quarry Garden. As the sandstone was being quarried, a fossilized imprint of a dinosaur footprint was uncovered along with immortalized ripples of 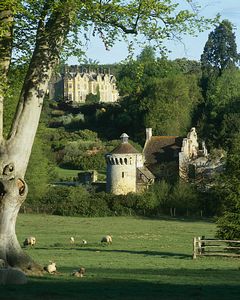 the Great Wealdon Sea which once covered this ancient landscape.

Scotney Castle also has a resident ghost, believed to be a Revenue Officer who uncovered the smuggling activities of Arthur Darrel in the early 18th century and was murdered. Apparently the ghost is always seen dripping wet!

The stunning and unique gardens were created by William Sawrey Gilpin in the 19th century on the steep bluff overlooking the River Bewel. Cleverly, the old Scotney Castle was selectively ruined to create an environment suitable for the new gardens, in similar style to the Abbey Gardens on Tresco in the Isles of Scilly.

Those who enjoy natural garden landscapes will enjoy the rambling ivy, roses and climbers which scramble through the remaining stonework.

Generations later, Christopher Hussey inherited this lovely estate in 1952 and continued the tradition of planting ornamental and endemic species of trees to bring colour and beauty to the gardens all year round. Upon Christopher's death in 1970 the castle and estate was left to the National Trust, enabling this wonderful heritage to be enjoyed by the public.

Days Out near Scotney Castle

Places to Visit near Scotney Castle