You are here:  Attractions -> Things to Do in Kent -> Kent and East Sussex Railway 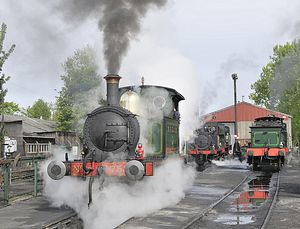 Although the railway had become part of the lifeblood of this charming rural area, economic pressures forced British Railways to withdraw the passenger service in 1954. Goods traffic continued to use the line until 1961, but then it too stopped and the railway fell silent.

This couldn't be allowed to carry on for long. Volunteers quickly got together and, in 1974, re-opened a section of the line. Their enthusiasm continued and in 2000 the railway was re-opened to Bodiam Castle - one of the National Trust's favourite tourist attractions.

The railway now runs for almost 11 miles, making it one of the longest such lines in the UK. One day it might be extended further still - to Robertsbridge in East Sussex. Today visitors can enjoy what is essentially a living and moving museum.

Three of the line's present fleet of a dozen engines plied the railway prior to its closure. Other working engines include ex-army, industrial, American and Norwegian locomotives.

The beautifully restored carriages are similarly historic, dating from Victorian times to the 1960s. And you can see restored stations and signal boxes too. Tenterden Town Station, moreover, is home to the Colonel Stephens Railway Museum, which tells the fascinating tale of the man who built and ran the K&ESR - as well as, astoundingly, 17 other independent railways.

All in all the K&ESR offers a superb day out, with the nostalgia of the days of steam and the enjoyment of travelling at the sedate pace of yesteryear.

Days Out near Kent and East Sussex Railway

Places to Visit near Kent and East Sussex Railway