You are here:  Attractions -> Things to Do in Perth and Kinross -> Scone Palace 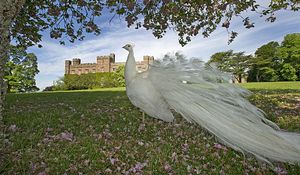 Scone is a place that breathes history like nowhere else in Scotland. Today, in the 21st century, it is the home of the Earls of Mansfield, and a major attraction to visitors from all over the world.

Fifteen hundred years ago, it was the capital of the Pictish kingdom and the centre of the ancient Celtic church. In the intervening centuries, it has been the seat of parliaments and the crowning place of Kings. It has housed the Stone of Destiny and been immortalised in Shakespeare's Macbeth.

Poised above the River Tay, the Palace overlooks the routes north to the Highlands and east through Strathmore to the coast. The Grampian mountains form a distant backdrop, and across 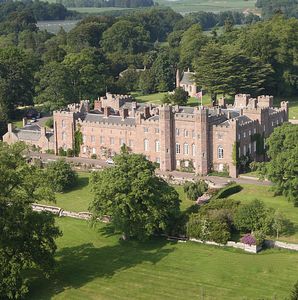 the river stands the city of Perth.

Two thousand years ago, the Romans camped here, at the very limit of their empire. They never defeated the warlike Picts, who later came to rule Scone, but the followers of St Columba had more success. By the early 7th century, a group of early Christians, the Culdees or servants of God, had established themselves here.

There is a great deal for visitors to see in a tour of Scone Palace. The State Dining Room is a very fine south-facing room. A unique collection of large European ivories, amounting to no less than 72 pieces, is housed here.

The State Drawing Room was formerly the 18th century Dining Room of the Palace. The walls are clad in early 19th century Lyons silk and dominated by a huge pair of Royal portraits by Allan Ramsay of King George III and Queen Charlotte.

The Library offers glimpses over parkland pastures to the River Tay, one of the most famous salmon rivers in the world. The Library now possesses fewer books than its name might suggest, their place having been taken by a breathtaking array of extremely fine quality porcelain.

The floor of the Long Gallery has been walked by many kings and queens, including Charles II on his way to his coronation on the Moot Hill in 1651; the Old Pretender (father of
Click Photo for Slideshow

The Moot Hill was the Ancient Crowning Place of the Kings of Scots. It is located immediately in front of the Palace and is crowned by a tiny Presbyterian Chapel, which, like the Palace, was Gothicized around 1804.

A replica of the Stone of Scone sits in front of the Chapel.

Situated in the open space between the Palace and the Wild Garden and Pinetum, are the lawns and formal Gardens. The lawns are home to free-roaming peacocks.

Days Out near Scone Palace

Places to Visit near Scone Palace