You are here:  Attractions -> Things to Do in North Yorkshire -> Nunnington Hall 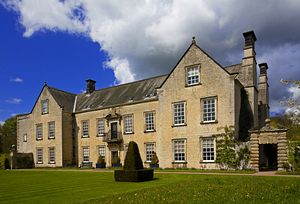 
Famous nowadays for displaying possibly the world's finest collection of miniature rooms, Nunnington Hall is far from miniature itself.

The Yorkshire location is known to have been the site of several manor houses and the current hall was probably built in the late 17th century. One of the most famous tenants when Nunnington Hall belonged to the Crown was Robert Huicke, who served as physician to Henry VIII, Edward VI and Elizabeth I.

Parliamentary troops used the house as a garrison during the Civil War, finally leaving it in poor shape. It was restored in 1685 by Richard Graham, 1st Viscount Preston who inherited this fine estate.

Lord Preston's loyalty to James II almost cost him his 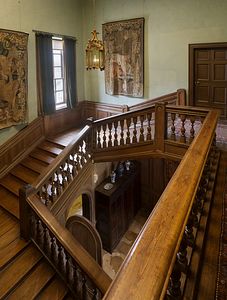 life and he spent time in the Tower of London before spending his final days at Nunnington Hall. It was probably Lord Preston who had the well proportioned two storeyed façade, Nunnington's finest architectural feature, added to the front along with the entrance and wrought iron balcony above.

The River Rye runs through the grounds which include 8 acres of organically managed grounds along with a sizeable walled garden which now shelters fruit trees, rose beds, mixed borders and a delightful tea garden.

Nature lovers will want to see the wildflower meadows in late spring and summer when primroses, buttercups, old-fashioned fritillary and camasses are a mass of colour beneath the fruit trees. The wandering peacocks add to this magical scene.

The interior of the house is splendidly furnished with antiques and hung with fine paintings. Visitors begin their tour in the Stone Hall, one of the oldest parts of the manor which is decorated with exotic animal skins on the walls and suits of armour, mostly collected by Colonel Fife. The 1920s fireplace is a reminder that Nunnington was a family home until 1952 when it was given to the National Trust by the owner, Mrs Fife.

The grandest room is the Oak Chamber, with its elaborate chimneypieces 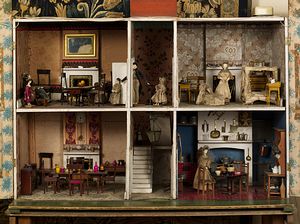 supporting Lord Preston's coat of arms. The room is lined with elaborate panelling and has more of the family's art collection including a number of paintings by John Ferneley. The ten foot long oak table does not look out of place in this large room.

Another interesting oil painting entitled "Shrimpers at Lyme Regis" was found in a storeroom of the house inscribed "Presented to me by JM Turner, 1832. J Harding". It was indeed the work of the famous artist himself, given to his known friend and watercolourist, James Duffield Harding. How a Turner painting came to be discarded in a store remains a mystery.

Lord Preston's bedchamber remains much as it would have been and has a collection of family portraits. There are a number of other fully furnished family rooms, bedrooms and a nursery with a collection of Victorian toys including a "Baby house" built around 1800.

The Carlisle Collection of miniature rooms is laid out in the attic in what would have been the servant's quarters. The rooms were all minutely constructed to scale are all fully furnished in various styles and eras.

Finish your visit in the tea room where waitresses serve excellent locally sourced produce which can also be bought in the National Trust shop.

Days Out near Nunnington Hall

Places to Visit near Nunnington Hall