You are here:  Towns -> Places to Visit in North Yorkshire -> Thornton-le-Dale

Things to do in Thornton-le-Dale, North Yorkshire 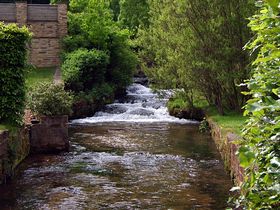 Thornton-le-Dale, sometimes referred to as Thornton Dale, is a delightful parish of 2,000 residents in North Yorkshire. This idyllic village is centred on the village green with its traditional market cross and old stocks, once used for pelting miscreants with rotten fruit.

Local thatched cottages in Thornton-le-Dale frequently feature on calendars and chocolate boxes, surely making this village officially "chocolate-box pretty"! In fact it has frequently been voted the most beautiful village in Yorkshire since 1907.

The 14th century All Saints Church has some interesting features to look out for. It has an old alms box with three locks. The font, hewn out of stone, is thought to be even older than the church. The church clock was repaired in 1920 as an offering of thanksgiving for peace after World War I.

Thornton Dale was at one time called Thornton-on-the-Hill. In 1600 Hugh Cholmeley, 1st Baronet, was born at Roxby Castle. He became a Member of Parliament and was a Royalist leader during the English Civil War for which he earned a knighthood and later a baronetcy.

His descendant, Sir Richard Cholmeley, was known as the Great Black Knight of the North. Although his home, Roxby Castle has gone, his remains are buried in the parish church.

Surrounded by a rural landscape, the main high street of Thornton-le-Dale is lined with pretty cottages, a row of 17th century almshouses and the local All Saints Church. The village has a hairdressers, newsagents and a local café. With its babbling stream it is a delightful place to amble around, admiring the well-kept English country gardens.

The local Wardell Bros general store doubles up as the North York Moors National Park Information Point and staff will provide information, maps and books to help visitors make the most of their time in Thornton-le-Dale.

At the centre of the village is the New Inn offering refreshments and bar meals. The local primary school is on Castle Road.

The village of Thornton-le-Dale maintains an enviable community spirit. Residents spend all year fund-raising for the Christmas lights which are erected around the village in December.

The much-anticipated local show is another highlight of the village calendar. It features all types of competitions for home produced vegetables, livestock, flowers and cakes.

On darker evenings, the village rehearses and puts on a drama which always plays to a packed house for its three-night run.

Things to do in Thornton-le-Dale

Visitors will enjoy the pleasant walk from Thornton Dale along the woodland footpath to Trench Pond. It is a good way to reach the neighboring village of Ellerburn which is equally delightful and has an old Saxon Church.

The North York Moors National Park is an area of unspoilt natural beauty with many historic sites and Thornton-le-Dale is just inside its boundary.

The area lends itself to cycling and scenic drives around the area. A popular attraction along the Dalby Forest Scenic Drive is the Bridestones, an unusual sandstone outcrop about nine miles from Thornton-le-Dale. Dalby Forest itself is also ideal for traffic-free walks and bike rides, spotting wildlife and wild flowers along the way.

Days Out in Thornton-le-Dale

Places to Visit near Thornton-le-Dale